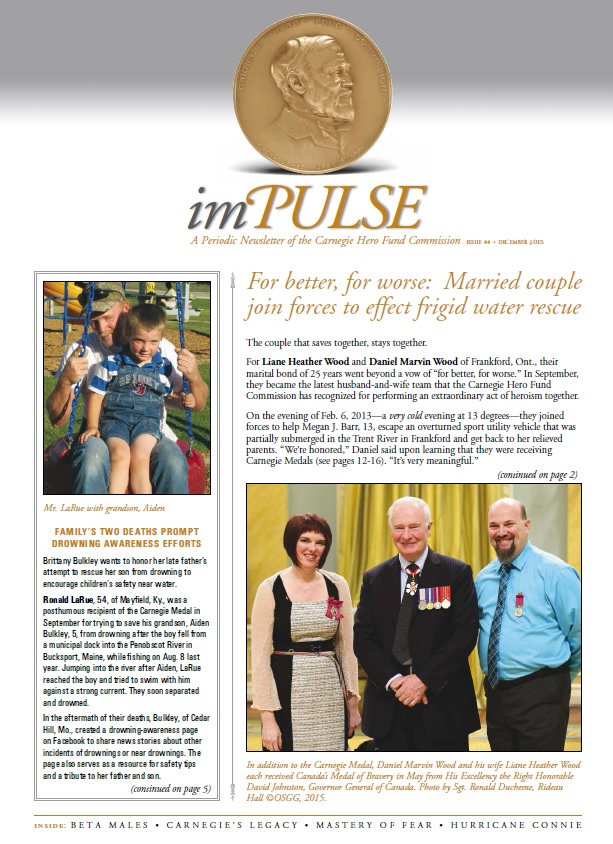 The December 2015 edition of imPULSE, the Commission’s quarterly newsletter, can be read online. This issue includes resumes of the latest awardees’ heroic acts, as well as stories detailing one family’s response to two tragic deaths and recent medal presentations. The newsletter also details the recent Carnegie Medal of Philanthropy presentation that honored eight generous individuals and families, and it looks at a heroic rescue that occurred 60 years ago and is still being celebrated today.

Other stories include the rescue effected by married couple Liane Heather Wood and Daniel Marvin Wood, recent remarks made by Commission board member Linda T. Hills at the grave of Andrew and Louise Carnegie, and one man considers whether we are still in a heroic age.

In other news, the Hero Fund recently received a generous $25,000 donation, the Commission features ‘best in humanity‘ on its Facebook page, a Carnegie Medal awardee was recently inducted into his alma mater’s hall of fame for his athletic achievement, and the Commission’s investigations manager was recognized for 30 years of service.

The Carnegie Hero Funds World Committee conducted a meeting in New York in an effort to strengthen bonds and sustainability of the nine worldwide hero funds.  In addition, a Carnegie Medal awardee was given a U.S. Dept. of Defense research grant and a medal returned home in a donation to a local historical society for preservation.  Finally, two Pittsburgh natives were elected to the Carnegie Hero Fund Commission board, and we hear news from the Commissions abroad, including hero funds in the Netherlands, Denmark, Sweden and the U.K. and Ireland.