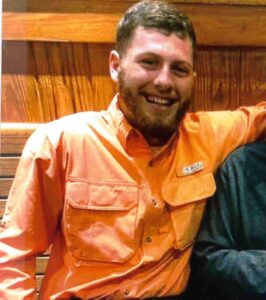 In an Aug. 23, 2020, single-vehicle accident, a sedan left a Winter Garden, Florida, highway, struck a fence, rolled several times, and came to rest on its roof at an angle on a chain-link fence, with its back end about 4 feet above the ground. Nineteen-year-old Corey A. Purinton, a Homosassa, Florida, laborer, was working nearby and responded to the accident. Flames broke out at the front of the car, and its driver, 62-year-old Richard J. Broccolo was seriously injured and moved toward the back of the car. Seeing Broccolo’s hand reach out through the broken-out rear windshield, Purinton partially entered the car through the rear windshield and pulled Broccolo toward him. As he came free, they both tumbled to the ground and Purinton patted out flames that were on Broccolo’s shorts, and dragged him away from the burning car. Broccolo sustained third-degree burns to his body as well as several broken bones and a head injury from the impact. Purinton inhaled smoke and suffered burns to his hands; he recovered.