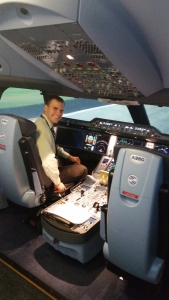 Michael J. Thanos, 22, of Chesterton, Ind., the son and grandson of Carnegie Medal awardees, is a senior at Purdue University, West Lafayette, Ind., where he is studying aviation flight and management—and doing quite well, with a 3.76 grade-point average. During summer 2016, he was one of four flight operations interns at Delta Air Lines, and we asked him about it:

“The internship was located at Delta’s headquarters in Atlanta, Ga. I supplemented the flight operations floor, which is in charge of anything to do with the flight crew. My day-to-day duties were wide-ranged. For instance, one of my projects was to create a Facebook group for the flight training department. It was geared towards Delta’s newly hired pilots who would request to be a part of the closed group until we removed them on their passing a simulator check ride. I created a full executive summary for this project, which should be approved by the executive leadership and activated by the end of the year.

“Besides the day-to-day duties, I was given an unbelievable opportunity to learn for my future career as an airline pilot. I flew every simulator in the Delta fleet. I went to London, Rio de Janeiro, and Rome. I jump-seated on every aircraft in the Delta fleet except for the 747 and learned from the best pilots in the industry. I observed high-profile meetings that decided the future of the company and built strong relationships with many members of the 80,000-member workforce. It was the best summer of my life, and I am so fortunate that I received the opportunity.

“I plan to spend my career at Delta Air Lines. First, I have to spend a few years building hours at a regional airline, but I am excited for the future with such a great company. I am now back at Purdue to finish my senior year and can feel the big transition on the horizon, which I look at with wide eyes.”

As the son of posthumous awardee of the medal, Thanos is receiving tuition aid from the Hero Fund. His father, Mark John Thanos, and grandfather, John Mikel Thanos, both died on Sept. 14, 2008, while attempting to save a neighbor boy from drowning in a flooded drainage ditch in Chesterton.   “I want to re-emphasize how grateful I am that this scholarship fund has allowed me to venture into the industry,” Michael writes. “I would have never been able to afford my flight training otherwise. I think about my father and grandfather and the sacrifices that they made to indirectly allow me to follow my passion.”