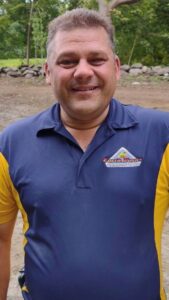 Christopher Etre was driving in Grafton, Massachusetts, the night of Dec. 13, 2019, when he saw a car slide off the road and enter the Quinsigamond River. A construction company owner, 48-year-old Etre, of Upton, Massachusetts, stopped at the scene, and after following the car as it drifted downstream, entered the frigid water and, while carrying a large wrench, swam 30 feet to the car, which had submerged completely except for its rear. Etre broke out the rear, driver’s-side window but was unable to remove the car’s 18-year-old passenger. Climbing onto the car’s roof, he used the wrench to break the rear windshield and then pulled the glass from it with his hands. He grasped the woman by the arms and assisted her from the vehicle. They both swam to safety on the opposite bank. The woman was not injured, and Etre recovered from cuts on his hands.