The CBS Sunday Morning cover story on the Hero Fund, which aired on Dec. 11, 2016, was seen by an estimated 6.24 million viewers.  “The national television profile went a long way to raise the visibility of the Hero Fund and its work,” said Eric Zahren, the Commission’s executive director, “most importantly by taking stories of heroes past and present to a wide audience.”  Jewels Phraner, social media coordinator, analyzed the Hero Fund’s website, Facebook, and Twitter accounts in the days after the show aired and found that their usage metrics “skyrocketed.”

Filming for the piece was done in August and September, both at the Hero Fund’s offices in Pittsburgh (photo above) and at sites in Illinois, where Scott Simon of National Public Radio interviewed two Carnegie Medal awardees (photo, page x).  In Pittsburgh, board chair Mark Laskow and Commission member Linda T. Hills answered Simon’s questions.

Simon:  While lots of people think they know what a hero is, Mark Laskow…has a particular definition:

Laskow:  It’s a person who’s under no obligation to act, leaves a place of safety, puts himself or herself in serious risk of death or major injury to save the life of another human being.  These people are almost always rescuing strangers.  They’re not bound to them by family or tribe or any personal interest.

Hills:  A tragedy or something terrible can be taking place and a whole bunch of people are just standing there and going, ‘Oh my God, what do we do?’  Or they don’t do anything, or they run the other way. And then this individual somehow finds that deeper, inner strength that they’re compelled to help this person in need.

Reaction to the show was favorable.  Many viewers—who either tuned in or viewed it on the internet—described a sense of inspiration from hearing about the heroes and showed appreciation for the Commission’s work.  Some volunteered their time to help the Hero Fund, and others offered to make a financial contribution.

A sampling of the reaction:

Dennis Salata of Wayne, N.J., teaches a lifelong-learning class at a library and requested additional information on the Hero Fund for a presentation.  “Also,” he wrote, “I learned that my next-door neighbor and good friend, Anthony G. Falzo, is a recipient of the award.”  Falzo received the medal in 1989 for saving two small boys from being struck by a train.

Bonnie Walsh of Temecula, Calif., grew up in western Pennsylvania and knew of Andrew Carnegie.  “I think it is a bright spot in our world that everyday persons get a medal for heroism, for doing something for someone without motive or promise of reward,” she wrote.

From Roberta Noss of Munising, Mich.:  “I was very moved by this!  I was wondering if anyone has compiled the stories into a book form or other media.  I would love to learn more about the everyday heroes!”

Gail Hurley of Port Matilda, Pa., said she and her husband “were moved by the incredible generosity of Andrew Carnegie and the individuals who have been named as recipients…We would love to be part of this incredibly inspiring endeavor.”

From Dennis Allen of Des Moines, Iowa:  “I believe in your purpose and beliefs.”

“This is a very nice award. My son and I have the honor of sharing this award for our action.  It made a difficult time more easy to bear.”—Kirk P. Yankasky, Carnegie Medal awardee #9844, of Glendale, Ariz.

“We need to make Americans aware of these everyday heroes. It is so uplifting. Thank you!” – Brenda Schrimer.

The CBS Sunday Morning Facebook page had these comments:

“The word ‘hero’ gets tossed around so loosely these days. These medalists are TRUE heroes! Great segment!”—Linda Andrews.

“Thanks for your work and recognizing those that do things with the most concern from others and saving lives!” —@Boston2Indy

“Loved this segment on everyday heroes. Kinda makes you wonder about your own bravery.” –@SundayMornExperience

“Fascinating story and reminder that there are regular people who do extraordinary things.” — @mcanna 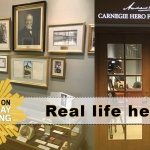