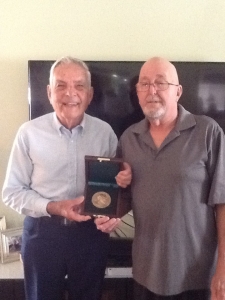 On Jan. 13, 2015, two elderly people, ages 82 and 86, were in the front seats of a sport utility vehicle that, in an accident, entered a pond and started to sink in water 12 feet deep at a point 23 feet from the bank.  Wright, 72, witnessed the accident, ran to the bank, and entered the water.  As water rushed into the vehicle, Wright swam to its passenger side and pulled a woman from the car.  He then swam to the driver’s door, where water had filled the car reaching the driver’s mouth.  He reached through the window and removed the driver partially.  He then held the driver at the surface of the water, as the vehicle continued to sink, falling away from them.  He towed the driver to the bank, where they were assisted from the water. Wright was nearly exhausted after the rescue and suffered from chest pains for a few hours after the rescue, but he fully recovered.

In the private presentation held Sunday, Fant reported that a crowd of Wright’s family, friends, and neighbors were in attendance.

Fant and his wife, Millie Fant, visited with Wright and also with one of the rescued victims.