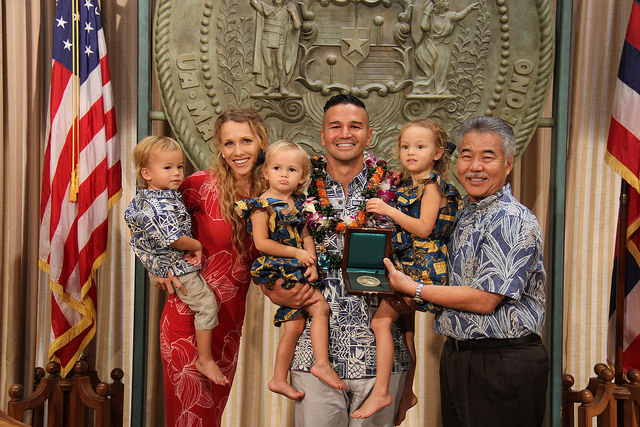 Keoni Bowthorpe, center, of Waialua, Hawaii, was awarded the Carnegie Medal by Hawaii’s governor, David Ige, right, at a ceremony in the state capitol in Honolulu in November 2016.  With him were his wife, Ashley, and their children, from left, Reef, Sky, and Violet.  Bowthorpe, a filmmaker, was paddle boarding in the Pacific Ocean off Haleiwa, Hawaii, on Oct. 9, 2015, when he witnessed a surfer being attacked 500 feet away by a tiger shark about 11 feet long.  Bowthorpe went to the man, whose leg had been severed, pushed the shark away with his paddle, and then laboriously returned him to shore.  After the rescue, Bowthorpe said, “I dropped to my knees, embraced my wife and three little babies, and never felt more gratitude.”