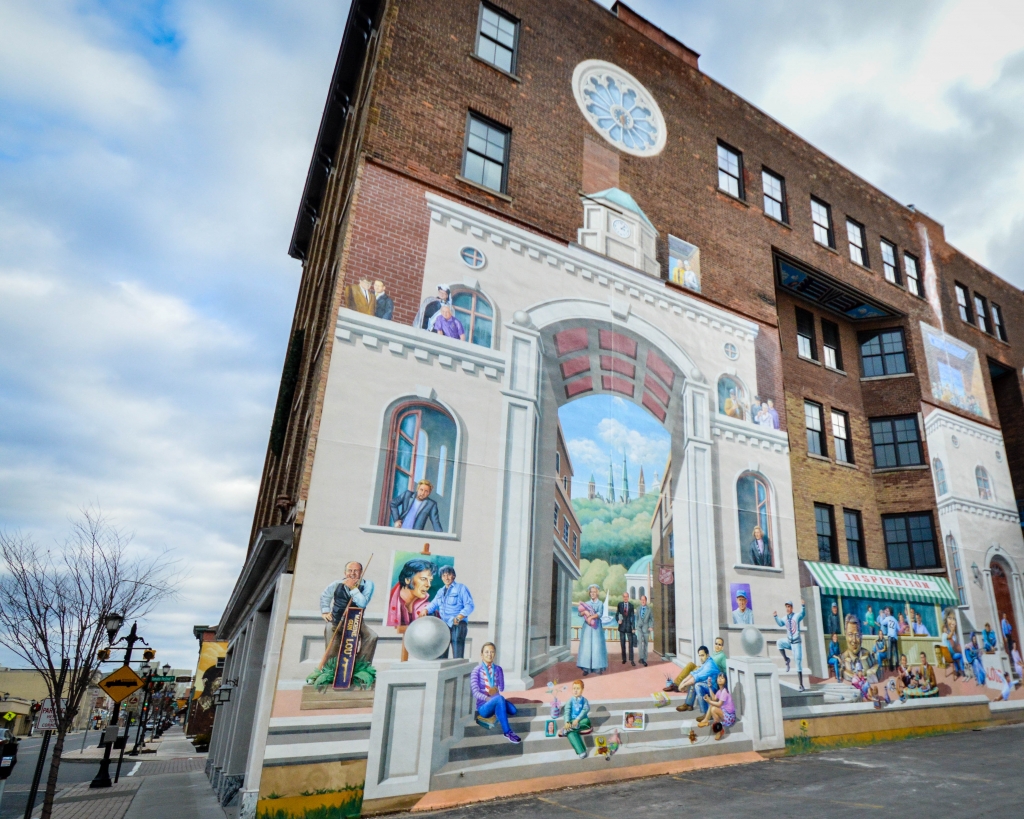 Decades after Nazareth A. Tomasetti rescued a man from a cave-in during a street-excavation project, his portrait adorns a five-story-tall building in his longtime home of Pittston, Pa.  Tomasetti, a 1953 recipient of the Carnegie Medal, is one of 57 celebrated Pittston residents who were painted last year in “Inspiration Mural” on the side of a historic building on the city’s Main Street.

The muralist, Michael Pilato, completed similar projects in other communities, including one in State College, Pa., the home of Penn State University.  Pilato said all of his murals are called “Inspiration” since they include people who inspire others.

The Greater Pittston Chamber of Commerce organized the beautification project, collecting 100 nominations.  One of Tomasetti’s five grandchildren, Tara Smith of Clarks Green, Pa., suggested him. City officials dedicated the mural in September 2015.  “It’s a magnificent piece of art,” said Rose Randazzo, the Main Street manager in Pittston, a city of 7,700 located in the Wyoming Valley of northeastern Pennsylvania.

Tomasetti was a 42-year-old married father of two sons when he stepped up as a hero in the city on Sept. 9, 1952.  He was working as a waterline maintenance employee when sand fell from the walls in a 13-foot-deep excavation, burying a 38-year-old male coworker.  Tomasetti jumped into the excavation and scrambled to free the man with his hands and a shovel for an hour and a half.  Small slides continued as Tomasetti made progress.  At one point, Tomasetti became covered to his shoulders in sand while trying to shield the man from more debris.  Ultimately, both the man and Tomasetti separately were pulled to the surface after Tomasetti freed them.  The man spent four days in a hospital, while Tomasetti recovered from fatigue.

Another of Tomasetti’s grandchildren, Laurie Rebovich of Eynon, Pa., said she remembers as a child writing a report about his heroism.  Tomasetti had to be prompted to talk about the incident before his death in 1973, but he was willing to do so when it came up in conversation, she said.  “I remember him saying he did what any other man would have done,” said Rebovich, who has had his medal since the 1980s.

Tomasetti’s example also lives on in the family tree.  Rebovich said that her grandfather’s story left an impression on her son, John, who became a firefighter and emergency medical technician.  Tomasetti’s family is thrilled, she said, that the mural is helping to spread his story again.  “The ceremony was outstanding,” Rebovich said.  “It brought tears to my eyes because it’s not often in your life that you have someone in your family who’s a true hero.”—Chris Foreman, Case Investigator