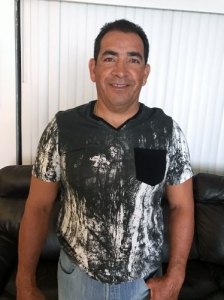 Carnegie Hero William E. Ramirez, 49, of Pembroke Pines, Fla., was among 100 people who became U.S. citizens at an Aug. 17, 2018, ceremony at the U.S. Citizenship and Immigration Services office in Hialeah, Fla.

“I belong to America,” he said during an interview through an interpreter. “I love this country.”

Ramirez was set apart from the other new citizens as he had risked his life to save a police officer in life threatening danger about two years earlier. Ramirez said that a woman speaking at the ceremony made note of his act of heroism as he received his citizenship.

On the morning of April 14, 2015, Miami police officer Rosny Obas, then 28, initiated a traffic stop. The suspect exited his vehicle and fired a semi-automatic pistol at Obas as Obas was getting out of his police car. Obas took cover behind the car and returned fire as the assailant continued to shoot. Ramirez witnessed the assault. As Obas ran from his car to search for cover, Ramirez drove toward him, opened the sliding door on the driver’s side of his van, and called for Obas to get in. Obas safely entered the vehicle, and Ramirez then sped from the scene amid sounds of more gunfire.

Ramirez said there was no reason not to come to the officer’s aid.

“I saw what was happening and (the assailant) kept shooting. Why wouldn’t I help?”

Ramirez said. For his actions, Ramirez was awarded a Carnegie Medal and $5,000 grant in December 2016, joining 20 other heroes who also became Carnegie Medal awardees that day.

Ramirez is self-employed and works on boats for a living. His wife of 20 years, Elizabeth Lopez, and their children, Yesenia Lopez, 27, and Daniel Ramirez, 18, were citizens already.