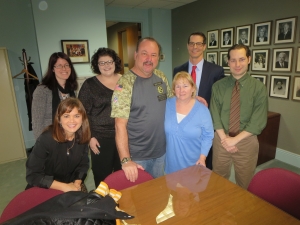 Carnegie Medal awardee Paul J. Archambault and his wife, Jacquelyn, center, of Corona, Calif., are fans of Pittsburgh’s football and hockey teams, and in early December 2016 they planned a trip to the city to watch the Steelers play the New York Giants at Heinz Field (Pittsburgh won, 24-14) and the Penguins play the Ottawa Senators at PPG Paints Arena (Pittsburgh again, 8-5).  Turns out the Hero Fund is a fan of the Archambaults and hosted them on a tour of the office and lunch.  Archambault and a co-rescuer, John Augustus Rose II, were each awarded the medal in 2004 in recognition of their harrowing rescue of an elderly woman from her cabin in the San Gabriel Canyon, Azusa, Calif., on Sept. 1, 2002, during a massive fire in the Angeles National Forest.  Deputies for the Los Angeles Sheriff’s Department, Archambault, then 43, and Rose exceeded their duties by driving 9 miles past a roadblock to reach the woman.  Their vehicle’s tires flattening, they returned through dense smoke, intense heat, flames flaring on either side, and debris in the roadway to take her to safety.   For Archambault, it was “the most terrifying time of my life.”  He and the woman stay in touch; just the week before their Pittsburgh visit they communicated.  Archambault is now a reserve deputy for his department.