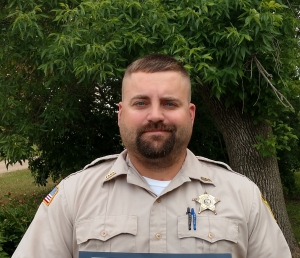 Cameron K. Hanson, a 37-year-old corrections officer of Fergus Falls, Minn., entered near-freezing water to rescue his friend, 65-year-old Leon G. Engelhart. Engelhart, Hanson, and others on Dec. 6, 2018, had been ice fishing on the ice-covered Wall Lake in Fergus Falls, staying away from a known area of open water. At night, Engelhart drove an ATV across the lake and entered the water. Hanson and another man went to the edge of the ice and Hanson entered the water. He swam about 75 feet to Engelhart and then towed him back to the edge of the ice by the back of his jacket. En route, Hanson submerged several times while attempting to keep Engelhart’s head above water. At the edge of the ice, the other man assisted Engelhart and then Hanson back onto the ice and then performed CPR on Engelhart, who vomited water and began to breathe again. Engelhart was hospitalized for severe hypothermia and recovered. Although Hanson did not seek medical treatment, at the time of the investigation he said that he sustained nerve damage to his hands and feet and his fingers frequently lost feeling.