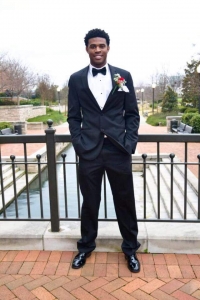 Calindo C. Fletcher, Jr., died after attempting to save Buddy W. Johnson from drowning, Athens, Alabama, July 4, 2015. Johnson, 37, called for help after failing to re-enter a kayak that had overturned at the center of Montgomery Lake. He started to swim toward the bank but submerged and did not resurface. In another party at the scene, Fletcher, 20, doffed his shoes and entered the water. He swam toward the point where Johnson was last seen but en route began to struggle. He turned to face the bank, and then he too submerged and did not resurface. Police and firefighters arrived shortly and pulled the men from the water. Both were taken to the hospital, where Johnson was pronounced dead of drowning. Fletcher was transferred to another facility, where he died two days later, also of drowning. 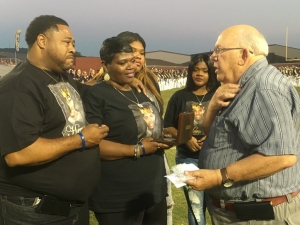 Calindo C. Fletcher, Jr., played football for Buckhorn High School, New Market, Ala., and it was on the same football field that his family was presented his Carnegie Medal, awarded posthumously, before a game in September. Fletcher, then of Huntsville, Ala., died at age 20 on July 4, 2015, while attempting to save a man from drowning in a lake in Athens, Ala. Receiving the medal were his parents, Calindo, Sr., and Tracilla Fletcher, and sisters Khadesia, center, and Ka’Daysha. The presentation was made by 1963 medal awardee Charles S. Harris, right, of Ooltewah, Tenn. Fletcher “loved and he loved hard,” his mother said. Photo by Teresa Harris.