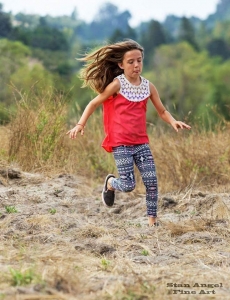 Angel in heaven, hero on Earth.

Those words were engraved in stone to memorialize Kiera Vera Larsen, who died at age 10 in 2016 while saving a toddler from being struck by a runaway vehicle.

For her actions, Kiera was awarded the Carnegie Medal posthumously in December 2016, becoming not only the youngest awardee in 2016 but the youngest in 18 years, since Misty Nacole Waters, also 10, of Nahunta, Ga., was cited posthumously in 1998 for attempting to save two younger brothers from drowning in the Saltilla River where they had been wading.

Kiera, an elementary school student from El Cajon, Calif., and other children were playing in the yard of Kiera’s family’s residence on Feb. 22, 2016, when a sport utility vehicle parked nearby began to roll backward.  In its path was neighbor Emmah Gusich, 2, whom Kiera had known since birth.  Kiera ran to the tot and pushed her aside but could not clear the vehicle in time.  Emmah suffered only minor scrapes.

Alyssa Gusich, Emmah’s mother, told a reporter from The San Diego Union-Tribune that Kiera “will forever be Emmah’s guardian angel.”  Kiera was the daughter of Hans and Cherise Larsen of El Cajon and Ginnifer Davis of Santa Rosa, Calif.

Another young girl was also named a posthumous recipient of the Carnegie Medal in December.  Natalie Renee Martin, 11, of Sheboygan Falls, Wis., died after saving her sister and attempting to save two brothers from a fire in the family’s home.  She and Kiera were among the 21 awardees of the medal announced in December.  For more, read descriptions of the awardees’ heroic acts.