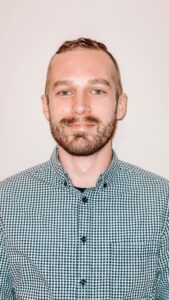 After a plane crash on Oct. 2, 2019, at a Windsor Locks, Connecticut, airport, employees, including 28- year-old operations supervisor Andrew J. Sullivan, of Enfield, Connecticut evacuated to a nearby parking lot. The crash had caused the wing of the vintage military bomber to break from the fuselage and careen into a metal-framed, vinyl building, its fuel catching fire and igniting the vinyl. Sullivan searched the lot for his 51-year-old co-worker who had been working in the burning building. Failing to find him among the evacuated, he went to search for the man, whom he heard calling for help from inside the building. Unable to enter the building through its doors that were blocked by fire, Sullivan ripped a hole in a vinyl maintenance flap and entered. In thick, black smoke, Sullivan called out and shone his cell phone flashlight. Sullivan reached the man at a point about 70 feet inside the building. Sullivan led them back to the torn flap where they exited to safety. Sullivan later recovered from burns to his fingertips and forehead.