Andrew Baugh saved Chase W. McDermand from burning, Lincoln, Illinois, June 12, 2015. Chase, 14, was driving a midget-chassis race car during a race at a speedway when a fire broke out in the engine. He pulled onto the grass infield and released his safety belt as flames grew quickly to engulf and surround the car’s open driver’s compartment. While a volunteer firefighter fought the flames with a fire extinguisher, another racer, Baugh, 28, sales manager, stopped his car and ran to Chase’s. Wearing a fire-retardant race suit that afforded protection, albeit time-limited, Baugh stepped onto a bumper bar along the driver’s side of the car to access Chase, who was effectively pinned in place by the steering wheel. Through flames, Baugh reached over the car’s roll cage and into the car, grabbed Chase under both arms, and lifted him, thereby moving the steering wheel and freeing him. Baugh pulled Chase from the car and carried him a short distance before falling to the grass with him. Chase suffered only a minor burn to an elbow.  87543-9851 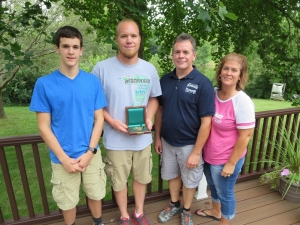 Andrew Baugh, second from left, of Mason City, Ill., was presented his Carnegie Medal in late August at the home of the young man he rescued, Chase W. McDermand, left, of Springfield, Ill. With them are Chase’s parents, Kevin and Shelly McDermand. Chase was driving a midget-chassis race car at a speedway in Lincoln, Ill., on June 12, 2015, when a fire broke out in its engine and grew to engulf the car. Also in the race, Baugh pulled over and extracted him from the vehicle. The young men have become close friends but remain competitors on the racetrack. Eric Zahren, the Hero Fund’s executive director, made the presentation.