In late 2016, 1973 Carnegie Hero William R. Whitacre of Salinas, Calif., returned his medal to the Hero Fund’s office with a request for assistance in enhancing its presentation.  The medal was encased in a block of Lucite (which was the Hero Fund’s practice at the time) and Whitacre wanted to break it free.  “It may seem silly,” he wrote, “but I have always missed not being able to touch the medal.”  Even so, surrendering it for the purpose was something of a sacrifice:   Whitacre is a decorated veteran, with his Purple Heart the only other award displayed in his home, and the temporary absence of the medal “shall be the longest we have ever been apart.”

“Such is the import of the Carnegie Medal,” he concluded.

Such is the import of the work of the Commission’s Executive Committee:  to make certain that the medal is awarded to the most deserving of the hundreds of cases called to its attention each year.  Nominations of new cases numbered 859 during the year, and 93 cases were felt by the Committee to fall within the awarding requirements.  The total number of awardees over the life of the Hero Fund is now 9,914, and if our current award rate continues, we will reach the 10,000-awardee milestone within a year.

As usual, the awardees represented a broad geographical range in 2016, with the 84 U.S. heroes coming from 32 states and the nine Canadians from four of the 13 provinces and territories.  In the U.S., Maryland and Michigan were home to the most awardees (seven each), followed by California and Illinois (six each).  In Canada, Ontario claimed the most, four.  At 9.7% of the year’s total, the ratio of Canadian heroes was similar to the historical rate of 7.7% over the life of the fund.

Likewise, the number of female awardees last year—seven, or 7.5% of the total—was similar, albeit slightly less, than the historical rate of 8.9%.  Death cases in 2016 were at 11.8% of the total, as compared with the historical rate of 20.4%.  In eight of the 11 death cases, the hero acted in behalf of family or extended-family members, including Natalie Renee Martin, who at age 11 discovered a fire in the basement of the family’s house at night and then made two trips to second-floor bedrooms to alert her siblings.

Natalie was the second-youngest of the year’s awardees, the youngest of whom, 10-year-old Kiera Vera Larsen, managed to save a tot from the path of a runaway sport utility vehicle but was then struck and killed by it.  The year’s oldest hero also died in the performance of her act:  Glenda Clement Beech at 69 attempted to save two grandchildren and a brother from their burning home.  The ages of the heroes in the 2016 range of 10 to 69 years included six under 20;  12 in their 20s;  26 in their 30s;  24 in their 40s;  19 in their 50s; and six over 60.

By type of act, most of the cases were fire-related, with burning-building and burning-vehicle rescues each numbering 27.  Water-related cases at 15 (including one submerged vehicle and four ice) were fewer than in the past and tied with the number of assault cases, which have increased over recent years.  Animal-attack rescues—one shark and four dog—were the next populated category, followed by three “moving vehicle, path” rescues.  In one of them, the “vehicle” was an animal, or more precisely a team of two 600-pound ponies that had broken loose at an agricultural fair and were headed toward a 3-year-old.  In stepped Calvin Bradley Stein, who scooped the child up but then was knocked down and dragged by the animals.  He survived albeit badly injured.

Each of the year’s awardees received a one-time grant of $5,000 and the pre-retirement awardees became eligible for scholarship assistance, defined as aid applied toward the academic costs of tuition, books, and fees.  Inestimable is the value placed on the latter program by the recipients (28 in 2016), one of whom is first in her class at Tulane University Law School, New Orleans, La., where yearly tuition is $48,000.   Regarding the beneficiaries, who are primarily the widows of posthumous awardees, $292,250 was paid in 2016 in monthly installments to 58 recipients. Each of the beneficiaries receives an annual review, with staff sympathetic to increased need.  The Hero Fund’s philanthropic giving totaled $1,033,908 during the year.

The Commission was featured in the lead segment of the Dec. 11 edition of CBS Sunday Morning through the efforts of Committee member Eric Zahren.  The initiative was one of several that he conceived or enhanced, including the expanded use of our website and social media applications (Facebook, Twitter, Tumblr, etc.) and the increased number of personal medal presentations, by either local government representatives or past awardees.  In September, for instance, Zahren coordinated personal presentations in 20 of the 25 awarded cases, and presentations were made by him in Illinois and by our former director of external affairs, Doug Chambers.  Chambers was accompanied by Committee member Nathalie Lemieux in giving the medal to four awardees at a dinner in Toronto early in the year, and at mid-year he hosted two other Canadian awardees at a dinner in Nova Scotia.  Locally, two other staffers joined Chambers at a church-sponsored presentation in New Bethlehem, Pa. .

The Commission continued its oversight in 2016 of the newly formed Carnegie Hero Funds Word Committee, which comprises the nine remaining of Carnegie’s original 11 hero funds.  As the World Committee meets regularly in odd years during the presentation of the biennial Carnegie Medal of Philanthropy and even-year meetings are attempted, a meeting was set for October 2016 in The Hague.  Fifteen representatives of six of the funds were in attendance, including Zahren and Walter Rutkowski from the Commission.  That committee’s leadership is shared by Commission Chair Mark Laskow and William Thomson of Scotland, one of the Carnegie great-grandchildren.  They have significant interest in the survival of the funds and the vision to keep the World Committee initiative tenable.

No changes were made at board level during what was a stable year, and significant anniversaries of two of our primary “stabilizers” were marked at the year’s annual meeting:  Frank Brooks Robinson reached 50 years of membership on the Commission and Thomas L. Wentling, Jr., 25.  With both of them active on the executive and finance committees, it is hard to overstate the value of their contributions.  At staff level, Chambers retired at mid-year after 14 years of service and we welcomed Zahren as executive director with every expectation Carnegie’s legacy will be enhanced and kept strong.  To those involved with this work, including the hard working staff, I offer my sincere appreciation for your efforts.  We could not move forward without you. 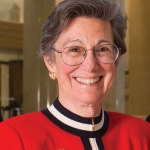 Dr. Veeder, a member of the Commission since 1992, has chaired the Executive Committee since 2002.