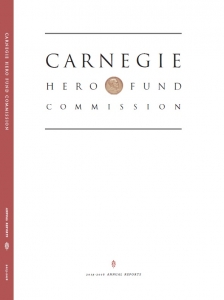 Annual reports summarizing the activities of the Carnegie Hero Fund Commission in 2015 and 2016 have been combined into a 132-page booklet that is soon to be fresh off the presses.  Featured in the book are the case resumes of the 177 individuals throughout the U.S. and Canada who were given the medal, 84 in 2015 and 93 in 2016.  Of them, 23 died in the performance of their heroic acts.

In his introductory comments, Commission Chair Mark Laskow writes, “If you pass through these pages and read the acts of heroism described in them, you will surely realize that the real memorial is in the lives of those rescued.”  Laskow notes that “the persistence of the heroic spirit among human beings” has never “flickered or faltered in the century-plus that we have been observing and recording the acts of these heroes.”

The book also lists $2.02 million in charitable giving during the two years, including grants made for continuing education for pre-retirement awardees and the dependents of posthumous and disabled awardees, and ongoing assistance for disabled awardees and the dependents of posthumous ones.  Philanthropic giving by the Hero Fund over its 112-year life totals $38.6 million.

The reports are being mailed to all of the years’ awardees and distributed to libraries and newspapers throughout the U.S. and Canada.  In his 1904 Deed of Trust establishing the Hero Fund, Andrew Carnegie specified that “an annual report, including a detailed statement of sums and medals granted and reasons therefor, shall be made each year and published in at least one newspaper in the principal cities of the countries embraced by the Fund.”

Copies of the book are available in PDF form online, or in print form by calling the Hero Fund (800-447-8900) or emailing Jo Braun.