Walter Legins, 39, coal mine shaftman, helped to rescue Stephen C. Grozio, 49, coal mine shaftman, from a cave-in in a mine, Nanticoke, Pennsylvania, November 20, 1950. At night while Grozio and two other men were at work on a platform in a mine-shaft 1,160 feet below ground-level, a cave-in occurred above them. Grozio jumped quickly onto a cage partly protected by a metal canopy in an adjoining section of the shaft, as a huge mass of debris struck the platform and demolished it. The other two men fell with the debris from 250 feet above the bottom of the shaft. The cage was wrenched from its guides but remained suspended 150 feet below a landing. The rumble of falling debris was heard at the surface, but the extent of the cave-in could not be determined. A group comprising two foremen, Legins, and three other men entered the mine at another shaft and reached the landing. Visibility into the damaged shaft was negligible, but all noted that a section of the shaft opposite the landing had fallen away. Crozio’s head-lamp was dimly sighted. In response to calls, Grozio apprised the others of conditions and told them his hands were numbed. Only Legins volunteered to descend to Crozio. Although aware that another cave-in might be imminent, Legins with a rope tied to him entered the shaft and was lowered to the cage, where he removed the rope. Using a metal bar, he broke away an obstruction in the shaft above the cage. Calling repeatedly to the landing with directions for the raising and lowering of the cage, Legins and Crozio after 20 minutes engaged the guide and were drawn to the landing. Legins and Grozio were taken to the surface. After extensive digging operations, the bodies of the other two men were recovered; and the shaft was closed permanently. Crozio was chilled, and he and Legins were nervous. Both recovered.

Legins worked as a shaft construction man for the Glen Alden Coal Co. It was in that capacity that he helped to rescue a co-worker from a cave-in in Nanticoke in 1950, when he was 39. In recognition of that act, Legins received medals from the Carnegie Hero Fund Commission, Joseph A. Holmes Safety Association, and Pennsylvania’s governor at the time, John S. Fine.

Fine awarded Legins a silver medal in February 1951 upon the recommendation of the state Secretary of Mines Richard Maize, according to an article in The Philadelphia Inquirer.

“It’s a pleasure to get up early in the morning to shake hands with someone who has saved a life,” Fine said during a ceremony in his office, the Inquirer reported.

The Hero Fund announced a bronze medal for Legins in October 1951.

Legins was buried in the St. Mary’s Cemetery in Hanover, Pa. 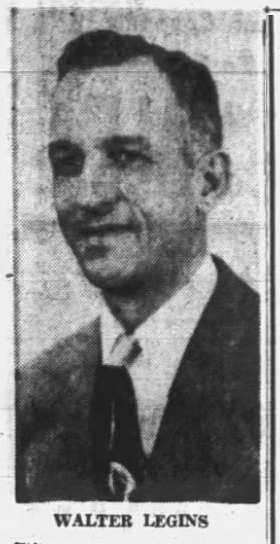