Turner Lagpacan helped attempt to rescue Dwight H. Handley from burning, Mulhall, Oklahoma, April 3, 2015. Handley, 62, was the driver of a tractor-trailer that, in an interstate highway accident, struck a disabled tractor-trailer and came to rest shortly beyond it. Flames broke out at the front of Handley’s badly damaged rig and quickly grew and spread along the tractor toward its tank trailer, and heavy, black smoke issued from the wreckage. Driving on the same highway, Lagpacan, 23, security officer, witnessed the accident. He parked and responded to the passenger side of the burning tractor, where he saw that Handley was still alive. Concluding that he needed a fire extinguisher to gain access to Handley, Lagpacan ran toward another truck, which was stopping at the scene. The driver of that truck provided Lagpacan a fire extinguisher and, taking one himself, ran with Lagpacan as he returned to the passenger side of Handley’s truck. When they were at a point about 15 feet opposite the passenger door, and before they could activate their fire extinguishers, the truck’s cargo tank, containing residual gasoline and fumes, exploded, blowing them 20 feet away, off the roadway. Flames grew to engulf and destroy the tractor-trailer. Handley died in the accident. Lagpacan was treated at the scene for smoke inhalation and then sought hospital treatment for continuing breathing problems. 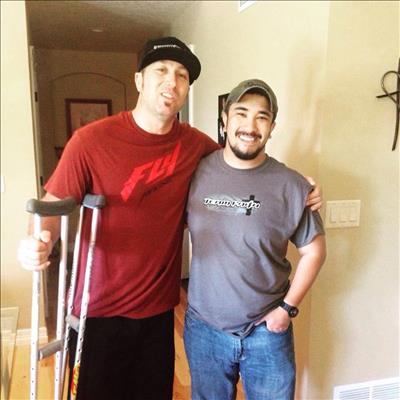