Rufus K. Combs, 48, blacksmith, saved Richard Godson, 42, from suffocation, Midway, Kentucky, April 2, 1906. Combs went into a vault containing a gas-making apparatus and rescued Godson, who was overcome by gas, while friends stood by, fearing to enter the vault.

Rufus K. Combs of Lexington, Ky., died Sept. 14, 1910, at the age of 52 at Good Samaritan Hospital in Lexington after an illness of about one month.

Combs was known to baseball fans of Lexington as “Marse Rufe.” The Lexington baseball team was said to have no more loyal supporter than Combs. A lover of the game, he was always on the front seat when the games began and was reported to never desert them.

Combs was an awardee of the Carnegie Medal for saving Richard Godson, a lawyer in Midway, Ky., on April 2, 1906. Godson had entered an enclosed pit to repair a gas engine and was overcome by fumes. Combs was passing by, was appealed to, and, although he and Godson were not on good terms at the time as a result of a difference, he entered the pit. After nearly losing his own life, Combs managed to bring Godson to the top of the pit.

Funeral services were conducted at Combs’ residence on Sept.15, 1910.

(Edited from an obituary on findagrave.com.) 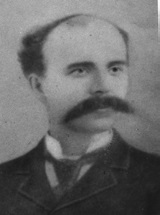