Robert Hughes helped to rescue Thomas A. Coleman and Louis J. Doran from a mine cave-in, Avoca, Pennsylvania, November 8, 1932. While Coleman, 37, miner, and Doran, 45, mine laborer, were digging coal in an abandoned entry that connected with a narrow shaft, a collapse occurred. Coleman was buried under shale at the bottom of the shaft. Doran was knocked to the floor of the entry and lay under shale four feet deep 18 feet from the shaft. Using their hands, Hughes, 50, miner, and another miner removed the shale from Coleman. Occasionally shale sloughed off the sides and dropped from overhead. In three hours they removed enough shale to free Coleman, who was pulled out. Hughes and the other man worked all afternoon and far into the night to make a trench to Doran. They erected posts, piled the shale behind boards resting against the posts, and finally reached Doran. While they were removing debris from over him, the sides of the entry caved in. Hughes and the other man ran to the shaft and were hoisted out. During the remainder of the night and the next morning all of the shale and other debris was removed by men under safe conditions, adequate braces having been placed, and Doran was taken out. He suffered injuries from which he died seven hours later. 32648-2753

Robert Hughes, well known upper county resident, died at his home, South street, Avoca, on Sunday after a brief illness.
Mr. Hughes had lived in Avoca the greater part of his life and was awarded the Carnegie Hero Medal a number of years ago for his work in a mine rescue at North Avoca. He was a member of Langcliffe Presbyterian Church.
Surviving are his widow, the former Mame Craig, and these children; William, Howell, N.Y.; Mrs. Lester Metz, Harding; Mrs. Kenneth Boyle, Washington, D.C., and Mrs. William Lamoreaux, Pottstown; his mother, Mrs. William Hughes, and the following borthers and sisters:
William Hughes, West Pittston; Ruby Hughes, Pittston; John, West Pittston; Mrs. J.F. O’Boyle, Mrs. Herman Dommermuth, Mrs. Henry Stahl and Miss Laura Hughes, all of Avoca.
The funeral will be on Wednesday afternoon at 2:30 with burial in Langcliffe cemetery. 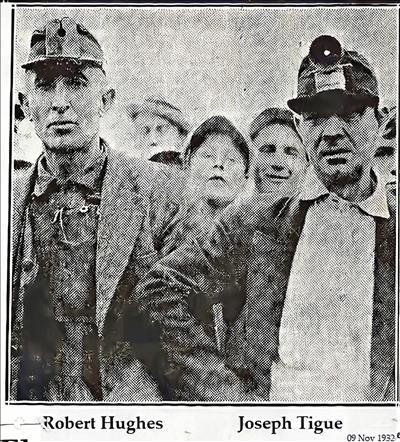