Richard D. Lockwood helped to save Kyle A. Nickell from drowning, West Carrollton, Ohio, June 22, 2003. Nickell, 18, was operating a personal watercraft on the Great Miami River when he and the craft went over a low-head dam and became caught in the rolling boil of water at the base of the dam. Lockwood, 32, estimator, and others witnessed the accident and responded to a point on the bank below the dam. Wearing a life jacket and carrying a 60-foot length of his boat’s anchor line, Lockwood entered the water and against the strong current waded toward the dam, stopping at a point opposite Nickell, who was in the approximate center of the river. Another man who had witnessed the accident had also waded out. Lockwood clipped one end of the line to his jacket and, with the other man holding the rest of the line, waded and swam through the turbulent water toward Nickell, who, by then submerged and unconscious, was about 40 feet away. Bracing himself on a rock, Lockwood looked for Nickell and, finding him, pulled him to the surface. The other man then pulled on the line to get Lockwood and Nickell from the boil and to wadable water. Lockwood, holding Nickell, and the other man returned to the bank, where they were helped from the river. Nickell sustained a cut and scratches and had swallowed water. He was hospitalized overnight, and he recovered. Lockwood was exhausted, and he too recovered.

A memorial service was held on Feb. 1, 2014, at the West Carrollton Church of the Nazarene. 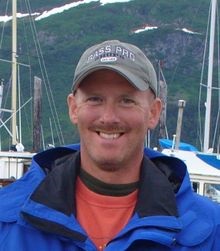