R. A. Mills rescued Margaret M. Tifft from burning, Pistol River, Oregon, September 16, 1988. Mrs. Tifft, 74, who had limited use of her left leg, was unable to exit her van when it caught fire because of a mechanical malfunction. Approaching the scene on his bicycle, Mills, 56, production machinist, immediately went to the passenger side of the van, extended his hands and arms through the opened door, and grasped Mrs. Tifft. He pulled her from the van as flames flared up from its underside, burning them both. Mills and Mrs. Tifft’s husband then helped her farther away. The van was shortly consumed by flames. Mrs. Tifft was hospitalized three days for extensive burns to her right leg and other injuries. Mills required hospital treatment for burns to his legs and a strained back; he fully recovered.

Richard “Fred” Allen Mills passed away peacefully at his home in Albany on February 16, 2022, at the age of 90 after battling pulmonary fibrosis for many years.

We will miss him but know he is now in heaven with his Lord.

Richard was born on February 7, 1932, in Independence, Oregon. He was the only son of Arthur Mills and Bessie (Fawver) Mills and stepmother Beth Mills. He grew up in Independence, where he completed his elementary through high school education, graduating from Independence High in 1950. He attended Oregon Technical Institute in Klamath Falls, graduating in 1953. He joined the Army, near the end of the Korean War, serving from 1953-1956. While serving, he was involved with the development of the Army’s rocket program.

He married Beverly Peterson on February 25, 1955, in Monmouth, Oregon. They lived in Texas and California before settling in Oregon for the remainder of his life raising four children together. Richard worked as a machinist at Rem/Gemini Metals retiring in 1994. In retirement they enjoyed traveling in their motorhome and helping with the many grandkids. Richard was a strong Christian man and longtime member of Eastside Christian Church in Albany.

He enjoyed wood working and bike riding. He was on the first Cycle Oregon trip in 1988 where he earned the Carnegie Medal of Heroism for rescuing a woman from a burning vehicle. He went on to complete five additional Cycle Oregon rides.

Richard had a lifelong dedication to Boy Scouts of America. He earned his Eagle rank as a youth in 1948. Then assisting wherever he lived until settling back in Albany where he worked many years with troop 91, later known as 100 as a leader, mentor, and record keeper for a total of 75 years of service.

In 2018 he had the privilege of attending the “Honor Flight” with other veterans to Washington D.C.

Richard was preceded in death by his parents and half-sister, Beverly Shirokov. He is survived by his wife, Beverly, and sons, Marty (Cindy) Mills, Tim (Connie) Mills, Greg (Bev) Mills and daughter, Jeanie (Dan) Mowery, 11 grandchildren and nine great-grandchildren.

Memorial gifts in his name may be sent to Eastside Christian Church for the church or Boy Scout Troop 100 helping boys to attend scout camp. Please indicate either church or scouts on your gift.

The family wishes to express appreciation to the many friends and family for prayers while his health declined. Also, to Samaritan Evergreen Hospice for their support during his final days. 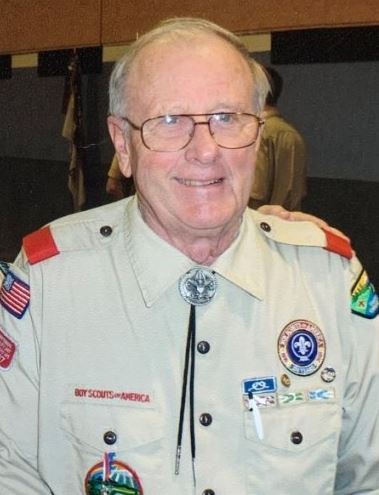