Philip J. Spear saved Mark E. Colburn from drowning, York Harbor, Maine, September 1, 1938. While fishing from rocks at the shore, Colburn, 47, was swept into the Atlantic Ocean, was buffeted by waves, and swept to a rock 35 feet from shore, where the water was 15 feet deep. He clung to the rock. There was swirling water between him and shore. From shore Spear, 24, salesman, having a line tied around himself to which a man held, swam and drifted to Colburn and got hold of the rock and of Colburn. Waves washed over their heads. The man who had held to the line lost his hold because it was too short. In response to Spear’s call, an end of another rope was thrown to him; and he wrapped it around his wrist and locked his arms around Colburn. Spear and Colburn then were pulled to shore, being rolled over twice by waves and sustaining cuts and bruises when they were pulled onto barnacle-covered rocks. 37379-3129

Spear was born Sept. 5, 1914, in Springfield, Mass., but spent his boyhood on a small general farm in Charlemont, Mass. The early years on the farm with his father, a self-taught naturalist, were often mentioned as among the more important parts of his total education. He did attend public schools in Charlemont and, in 1937, earned a bachelor’s degree in entomology from the then-Massachusetts State College.

Before and after WWII, he worked in New England and California in termite control. In 1948, he returned to the University of Massachusetts for graduate study in entomology leading to a Ph.D. in 1953. During this time, he was also director of the laboratory of American Aerovap, Inc., which investigated vaporization of insecticides. Byproducts of this work included two U.S. patents and a bibliography for the Army.

During WWII, he was commissioned in the Army Corps of Engineers and served about a year as platoon leader in the 594th Engineer Boat and Shore Regiment. At the end of February 1944, he was transferred to the Army Transportation Corps as commander of the 334th Harbor Craft Company. A month later, that company began movement overseas where it trained briefly at Liverpool and Portsmouth, England, before moving successively to Omaha Beach, Isigny-sur-Mer and Rouen, France. After the war, he had duty as entomologist in a research and development group of the Medical Service Corps, Army Reserve, from which he retired in 1957 with rank of major.

In 1954, Spear was employed as technical director of the National Pest Control Association (NPCA), the trade association of the urban pest management industry in the U.S. At that time, workers, seeking to control pests in homes and businesses, had great need for sound information about safe and effective use of the many new chemicals that had been developed in wartime. He gathered and communicated to practical workers in the field the useful results of research. Communication was accomplished in workshops throughout the country and by publication of scores of technical releases. He alerted state, federal, and commercial workers to the information needs of the industry and organized funding to support research. These activities lead to opportunities to work with numerous panels and committees of national and international bodies. As senior director of research, he opened NPCA’s Washington, D.C., office in 1972 to strengthen communication with federal regulatory and legislative bodies. He continued this work, which required registration as a lobbyist, until his retirement in 1980.

Spear was a member of the Unitarian Universalist Fellowship of Gainesville, and served it in a number of leadership positions. He was a member of the Entomological Society of America and Sigma Xi and a Fellow of the American Association for the Advancement of Science. In 1940, he was awarded the Carnegie Medal for saving the life of a fisherman who had been washed into the sea at York Beach, Maine, of Sept. 1, 1938.

Always interested in nature, he was a fisherman, avid bird watcher, and, in later life, a gardener who constantly sought to add variety and appeal to the plantings about his home. 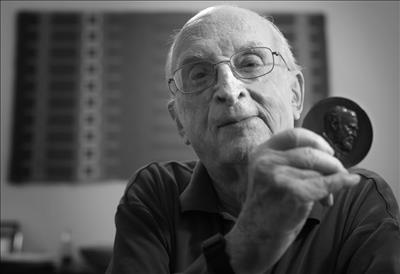