Paul W. Mongiello rescued Lindsay Simmons and Patrick H. Woodward from burning, Kansas City, Missouri, February 19, 2013. Simmons and Woodward, 33, were inside the restaurant where they were employed when natural gas that had leaked into the one-story building exploded. The massive explosion caused the building’s roof and most of its walls to collapse, and the resulting debris caught fire. Mongiello, 57, insurance executive, was in his car at the intersection next to the restaurant at the time, the blast rocking his vehicle. He parked nearby and, responding to the scene on foot, heard screams coming from the debris field. Seeing Simmons standing just inside the building, he walked through debris to reach her and then placed her on his back and carried her outside to safety. Returning to the site, he was told by another employee, who had just made it to safety himself, that the restaurant was still occupied. The two men entered the part of the structure that remained essentially intact and, despite growing flames feeding throughout the remains of the structure, made their way through debris to find Woodward. As he had done with Simmons, Mongiello positioned Woodward on his back and carried him outside to safety. Within moments, flames engulfed the wreckage and issued high over it. Another employee of the restaurant died at the scene, and several others were injured. Woodward required hospitalization for treatment of burns, and Mongiello recovered from smoke inhalation. 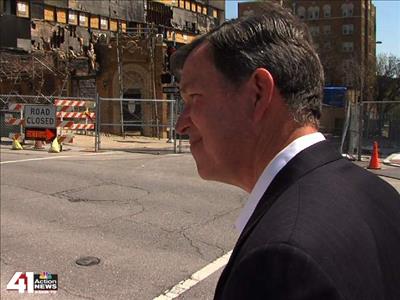