Mary Holt Johnson saved Vera B. Leonard and three others from drowning, Fernandina Beach, Florida, August 18, 1951. While bathing in the Atlantic Ocean, Mrs. Leonard, 54, and her niece were swept from their feet by waves and carried into deep water by a strong tidal current. They were separated, and Mrs. Leonard, who had been submerged repeatedly, lost consciousness. A swimmer took the niece within 100 feet of shore, where both became tired and trod water. The niece’s mother, a poor swimmer, entered the surf and reached them. She and the niece became panic stricken and struggled with the other swimmer, and all were submerged briefly. An inflated tire tube was thrust within their reach by a man who returned immediately to shore, and they obtained holds on the tube and drifted farther into deep water. By then, Mrs. Leonard had been carried 600 feet from shore. Miss Johnson, 19, student, ran 150 feet to the water, waded a short distance, and swam to Mrs. Leonard through waves two to three feet high. Taking hold of Mrs. Leonard, Miss Johnson towed her to wadable water. Others carried Mrs. Leonard from the water. Miss Johnson, who was tired, was attracted by the frantic calls for help of the niece and her mother. Swimming 550 feet, she reached them. Urging them to be calm, Miss Johnson grasped the tire tube and with effort towed them and the other swimmer to wadable water. All reached shore safely. Mrs. Leonard was revived. Miss Johnson was greatly fatigued. She and the others recovered. 3838-42523

Born in Pensacola, Fla., she was the daughter of Emanuel Joseph Johnson, Sr., and Norma Holt Johnson. She was a 1949 graduate of Fernandina High School, where she was excelled on the swim team. As a teenager in Fernandina she worked as a lifeguard at Main Beach Park. She later attended the University of Florida, where she continued her involvement with organized collegiate team swimming, winning many competitions and receiving many medals. At the age of 19, while home on college break, she saved four swimmers from drowning. For her heroic actions she was awarded the Carnegie Medal.

From the mid-1970s to the mid-1980s she lived in Jacksonville, Fla., and then again in Ponte Vedra Beach, Fla. Boswell was an avid boater, owned her own sail boat, and was a member of the Rudder Club of Jacksonville, where she participated in many races. She obtained her Florida real estate license and worked for the Jacksonville Beach office of Watson Realty. Subsequently, she decided to return to Fernandina Beach where she worked as a realtor with her brother, E. J. Johnson, Jr., until 1993.

At that time she joined Amelia Realty, where she remained until retiring in 2003. In her later years, she was active in many civic and community affairs, as well as local historical activities. 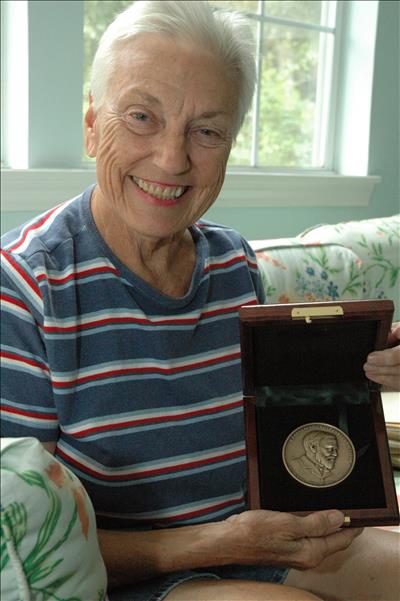