Margaret F. Williams saved W. Herbert Dick from drowning, Conyers, Georgia, May 24, 1930. While Herbert, 15, was swimming in Big Haynes Creek, he got into distress in water 10 feet deep. After a youth had made a slight attempt to rescue him, Margaret, 14, schoolgirl, from wadable water swam 30 feet to him. Herbert was greatly excited and grasped her at the shoulders. Supporting him, Margaret swam and drifted 60 to 70 feet, for the most part in a current of 3 m.p.h. Fearing she would not be able to reach wadable water, she called for help and soon afterward got hold of a fishing pole that was extended to her by a man in wadable water. The man drew them a few feet toward himself and then carried Herbert to the bank. Margaret swam a stroke or two farther and waded to the bank.

Margaret Williams Herrington of Atlanta, Ga., died at home on Jan. 7, 2012. She was born in Lyerly, Ga., on Feb. 10, 1916. She spent her childhood in Oxford, Ga., and attended Emory University at Oxford and the University of Georgia.

As a teenager, she was awarded the Carnegie Medal for saving a boy from drowning on May 24, 1930. Herrington was a member of Grace Methodist Church, Atlanta Elks, Ladies of the Old Guard, and the Read and Fed Book Club. She was an avid bridge player and traveler.

She was buried at Oxford Historical Cemetery.

(Edited from an obituary in the Atlanta Journal-Constitution, Jan. 8, 2012.) 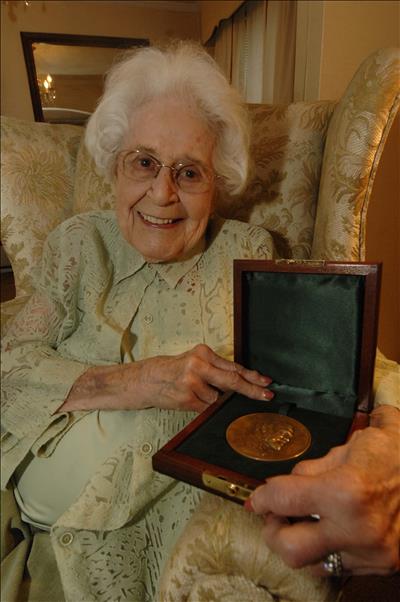