Lowell E. Kayser saved L. Clyde Franklin and attempted to save Lawrence J. Allard, Jr., from drowning, Prairie du Rocher, Illinois, June 4, 1935. Clyde and Lawrence, both 15, who were not swimmers, shoved a leaking boat from the bank of a pond and then clung to it and propelled it to water 10 feet deep by stroking with their feet. Lawrence released his hold 40 feet from the bank and was briefly submerged. At the same time Clyde tried to get into the boat, but it turned over and he was momentarily submerged. The two boys threshed five feet apart and five feet from the boat. Lowell, 16, schoolboy, who was a poor swimmer, waded from the bank and then swam 30 feet to Clyde. He towed Clyde seven feet to the boat, but Clyde continued to thresh and did not take hold of it. Towing Clyde, Lowell then swam to wadable water, being briefly submerged once, and both waded to the bank. Lowell then waded and swam to Lawrence but got a poor hold on him, and Lawrence slipped from him and sank. Lowell, who was unable to dive, swam in a circle to render aid, but Lawrence did not reappear. Lowell then swam to wadable water. Lawrence drowned. 34787-2889

As a teenager, he received the Carnegie Medal. Using the money associated with the award, Kayser attended David Rankin trade school in St. Louis, studying machine shop practice. He then played semi-professional baseball before taking a job as a die maker for the Metzger Co.

Kayser was a World War II Army veteran and served in North Africa and Italy. He was the recipient of the Purple Heart and the Soldier’s Medal, given for valor in the rescue of injured men during an ammunition dump explosion. After the war, Kayser worked as a machinist. He served as the general foreman for Gardner Denver in Quincy for a large part of his career.

Kayser was a past Exalted Ruler of the Quincy Elks Lodge. He liked to hunt and fish and tend to his vegetable garden. He was a lifelong St. Louis Cardinals baseball fan.

He was buried in Calvary Cemetery in Quincy. 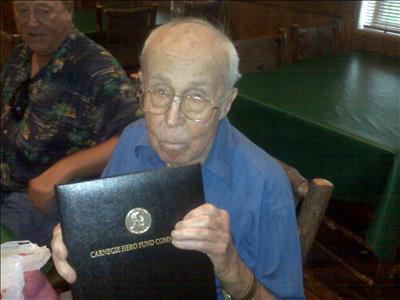