Lawrence A. Hanlon, 40, assistant chief, city fire department, helped to save Jacob Flyter from drowning, Milwaukee, Wisconsin, April 30, 1906. Hanlon and two other men descended a 55-foot shaft and rescued Flyter, who was imprisoned in an air-chamber of a tunnel under the Milwaukee River, into which water was leaking. 1048-62

Funeral services for Lawrence A. Hanlon, 80, former deputy chief of the Milwaukee fire department, will be held at 9:30 a.m. Saturday March 3, 1945, at St. Matthew’s church, S. 25th and W. Scott sts. Burial will be in Holy Cross cemetery.

The most noteworthy incident of his career occurred in April, 1906, when he led the rescue of an Electric Co. worker trapped in a tunnel under the Milwaukee river at Knapp St. Water was seeping into the tunnel, and Sherburn Becker, then mayor, who was on the scene, ordered Chief Hanlon not to risk his life.

“Mr. Mayor, if you were down there, you’d probably like to have somebody try to get you out,” Hanlon replied, and disregarded the order. He and two volunteers who assisted him were given Carnegie medals for heroism. A dramatization of the rescue was broadcast over a nation-wide radio hookup in 1938, and Chief Hanlon flew to New York to appear on the program.

Chief Hanlon’s disregard for danger was shown throughout his service. No subordinate was ever sent to lead the way when danger loomed. He was inujured three times while with the department. In 1892 he suffered blood poisoning after stepping on a nail at a fire. In 1900 he was hurt internally when the fire truck on which he was riding collided with a streetcar, and in 1904 a defective fire extinguisher tank exploded while he was examining it, breaking his jaw and causing a scar that remained through life.

He was at every big fire in the city during his service. In the third ward fire, the company of which he was lieutenant was given official commendation for saving a building at E. Buffalo and N. Water sts.

Since his retirement, Chief Hanlon had been active in Draft Board 23, of which he had been a member from its organization.

He is survived by his wife, Mary; a daughter, Mrs. John Zahnle of Highland Park, Ill.; three sons, Clarence, Harold and George, a deputy sheriff; three sisters, Mrs. Elizabeth Shaw of Green Bay, Mrs. Margaret Caveney of South Milwaukee and Mrs. Alice Oatway of Waukesha, and three brothers, William of Tuolumne, Calif., and John and Ted of Milwaukee, and 11 grandchildren.

Another brother, Lt. Thomas Hanlon of the fire department, was one of six firemen killed in a dust explosion at the Marsh Wood Products Co. in April, 1926. 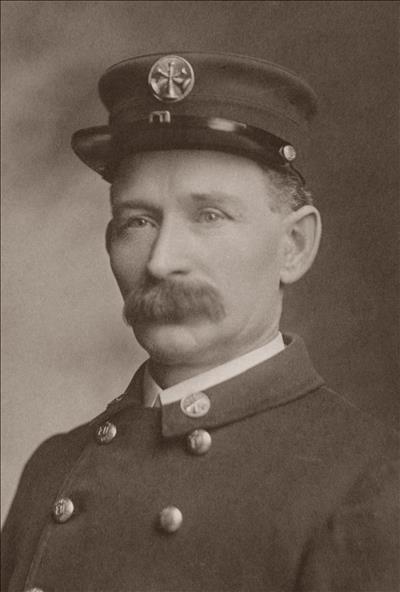