Justin Lee Greenwald saved Ronald L. Lallone from burning, Calabasas, California, November 29, 2015. Lallone, 81, was asleep in a bedroom in one end of his mobile home after fire broke out at night, at the opposite end. Flames spread quickly, blocking the front door, and filled the structure with smoke. A neighbor, Justin, 17, high school student, responded to the scene from his nearby home. He approached the burning structure’s side door and, finding it locked, punched out the glass and then forced the door open with his shoulder. Justin entered the house to flames that were spreading in the living room and, assuming that Lallone was in his bedroom, turned into the hall that accessed the bedrooms. He entered Lallone’s bedroom, pulled Lallone to his feet, and, supporting him, guided him to the side door and outside to safety. Flames grew and destroyed the house. Justin suffered cuts to his right hand and feet but did not require medical treatment. He recovered. 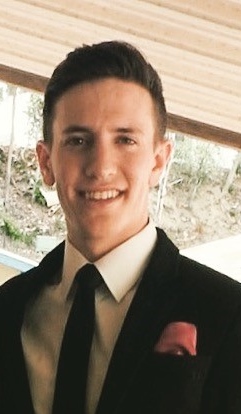