Joseph P. Tigue, Sr., 916 William Street, Avoca. Carnegie Medal Winner, was pronounced dead on arrival at Taylor Hospital Saturday morning at 9:35 by Dr. L. C. Druffner.
Mr. Tigue suffered a heart attack while digging a ditch in front of his home. Chief of Police Robert George was summoned and he notified Moosic ambulance which removed Mr. Tigue to the hospital.
Last rites of the Roman Catholic Church were administered by Rev. Augustine P. Conniff of St. Mary’s Church. Avoca.
Moosic ambulance was manned by William Butts, Andrew Stull and Charles Maurer.
Mr. Tigue, a life resident of Avoca. Was the son of the late John and Mary Cawley Tigue of Avoca. He was a retired employe of Payne Coal Company, Exeter, and was a member of the borough council for 16 years.
In 1934 he received the Carnegie Medal for rescuing two men in a mine cave at the Quinn Coal Company, Avoca. In November 1932, Mr. Tigue was a member of St. Mary’s Church, Avoca. and the Holy Name Society.
Surviving are his wife, the former Mary Meehan; two daughters, Mrs. Ann Fitzsimmons, at home; Mrs. Robert Kennedy, Wyoming; a son, Joseph, Jr., Avoca school director; nine grandchildren and several nieces and nephews, including the Rev. Linus Tigue, OFM, of Georgia.
Funeral will be held from the family home Wednesday morning at 9 with a requiem mass at 9:30 in St. Mary’s Church, Interment in the parish cemetery. 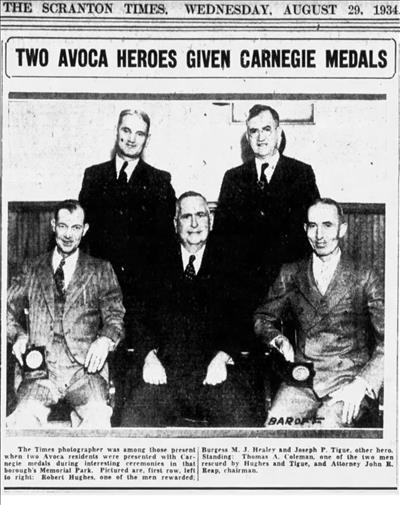