Jane E. Isbell, 13, schoolgirl, saved Elizabeth L. Drake, 16, from drowning, Guntersville, Alabama, July 14,1930. While Elizabeth was swimming in the Tennessee River, she got into deep water 60 feet from the bank and cried for help. Jane swam 15 feet from wadable water to her, and Elizabeth grabbed her by the wrist and then the shoulder, causing Jane to be submerged momentarily. Elizabeth then released her hold. Jane took hold of her by the arm and tried to swim to the bank with her, but a current carried them farther from the bank. After she had maintained Elizabeth for a considerable time, a man arrived and paddled a boat to them. Elizabeth was taken into the boat. Jane was fatigued, but she held to the boat and was towed to shore.

Jane Isbell Frazier Conley, 94, died at her home in Scottsboro, Ala., on Nov. 21, 2011. Conley was born in Guntersville, Ala., the second daughter of Leila Mae and Col. D. Isbell. She was considered by many a great friend and asset to the city of Scottsboro. “She was a true Southern lady who had style and fashion,” said Gail Duffey, the city’s former clerk.

Following her graduation from The University of Alabama, Conley’s wide-ranging travels included working on Capitol Hill in Washington, D.C., during World War II, being a secretary at The First Congregational Church in Los Angeles, and, in 1946, as receptionist to Alabama’s governor, James E. “Big Jim” Folsom.

The following year, she married Maj. William H. Frazier, Jr., who was stationed at nearby Gunter Field, Maxwell Air Force Base. In November 1950, he was killed in action while serving in Korea. She later met and married Paul W. Conley, a businessman from Scottsboro.

Teacher, church leader, and community volunteer were all responsibilities that Conley gladly accepted as she settled down to raise her family. In 2008, she was honored for her outstanding volunteer contributions with her own day in Scottsboro. 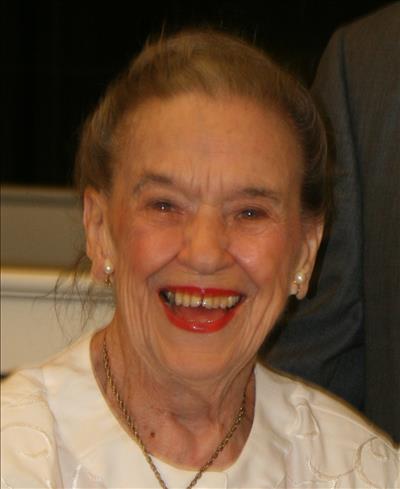