James M. Flanigan, 20, mine car tender, rescued William Derrig, 19, laborer, and John W. Mullery, 21, mine car tender, in a mine after an explosion, Inkerman, Pennsylvania, May 7, 1909. Flanigan went into an abandoned drift, immediately following an explosion of gas, and brought out Derrig. He returned, others refusing to go with him, and got Mullery. Both Derrig and Mullery were severely injured, the former dying one week later. Flanigan’s hands were burned from beating out fire in the men’s clothing, and he was disabled 18 days. 3867-388

Death came with startling suddenness yesterday afternoon to James W. Flanagan, of 51 Church street, for many years a resident of 30 Welsh street, Sebastopol, Jenkins Township, who was stricken with a fatal heart attack as he was doing some painting in an apartment at 79 South Main street. Dr. Martin J. Walsh family physician, was summoned and prounounced the man dead.
Exactly two months ago–on March 13th of this year–The Gazette carried a Page One story entitled “Flanagan’s Role as Saver of Lives Remarkable One,” in which was explained in detal how, as a youth of 16, while employed as a mule driver, he saved the lives of John Mullery and Williiam Derrig, who were caught in a gas explosion at No. 6 Colliery, Pennsylvania Coal Company, and was cited by the Carnegie Hero fund Commission and presented with $1,000.
Subsequently, Mr. Flanagan was wounded at the Battle of Argonne Forest while serving with the 80th “Blue Ridge” Division in France, for which he was awarded the Pruple Heart. Still later, on December 2, 1931, he played a major part in saving the life of Mrs. M. J. Martin, of Scranton, wife of the renowned Lackawanna County Lawyer, from being engulfed in a surface settling in proximity to Moses Taylor Hospital, Scranton.
Born and raised in Pittston, Mr. Flanagan was a son of the later Michael and Catherine Loftus Flanagan. He was employed as an electrician by Payne Coal Company until retiring six years ago.
Mr. Flanagan was a veteran of World War 1, having served overseas. he was a member of St. John the Evangelist Church, the Holy Name Society, Friendly Sons of St. Patrick and John D. Stark Post, American Legion. His wife, the former Kathleen MacDonald, died in 1951.
Surviving are these children: James and Jeanne, WilkesBarre; Mrs Ruth Bryson, Winchester, Mass; Joseph, Buffalo, N.Y.; also three grandchildren and a sister, Mrs. Mary McCann, Long Beach, Calif.
The funeral will be held from the Donnelly Funeral home , 802 Susquehanna Ave., West Pittston. Friends may call tonight 7 to 10 and daily thereafter 2 to 5 and 7 to 10. 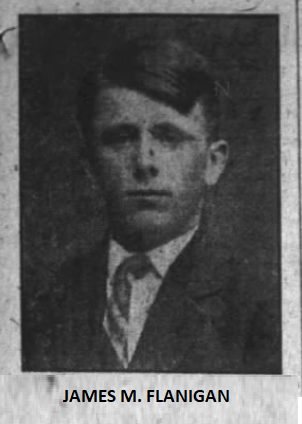