J. Ryan Thornton rescued Wanda A. James from burning, Thornton, Colorado, September 5, 2018. James, 61, physically disabled, was in a bedroom of her mobile home when fire broke out on her bed. Unable to flee, she used a medical alert device to report the fire and Thornton, 41, police officer who was on patrol nearby, responded to the scene. Upon arriving, Thornton observed heavy smoke issuing from James’s bedroom window and flames inside the room. He approached the home’s locked front door, kicked it open, and entered. Thornton crawled about 15 feet to the bed where James was sitting, moving items on the floor near her bed that blocked his path to her. After briefly retreating outside for air Thornton re-entered the home, and again crawled to James. He lifted her from the bed and, standing, carried her from the room. Thornton tripped and fell, then stood up and dragged James the remainder of the way to the front door, where he was met by first responders who took her farther away to safety. Flames consumed the bedroom. James suffered a severe burn, requiring surgery. Thornton was hospitalized for two days for treatment of inhalation burn injuries. He recovered. 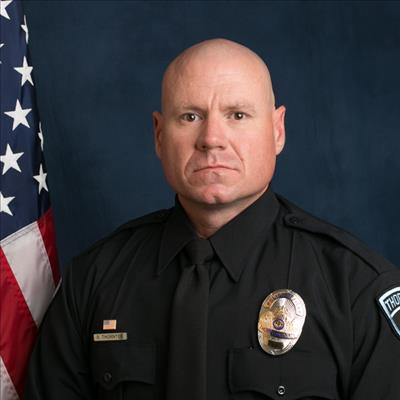