Hannah Lynn Goorsky rescued Chad Summers from an attacking tiger, Sacramento, California, March 23, 2003. While attempting to close the door to a den of a tiger cage at the zoo where he was employed, Summers, 30, was attacked by a 320-pound tiger that had rushed the door. Wounded, he went to the floor, where the tiger began to maul him. Starting her third day as a volunteer at the zoo, Ms. Goorsky, 23, was standing nearby and witnessed the attack. She grabbed a shovel, approached the tiger, and struck it on the head repeatedly with the shovel. The tiger retreated into its den, Ms. Goorsky securing the door. Summers was hospitalized for treatment of numerous bite wounds. 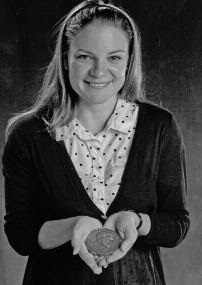