Gregory D. Plancich helped to save Steven W. Stark and four others from drowning, Kodiak, Alaska, January 25, 2012. Stark, 40, was the captain of a 67-foot fishing boat, the Heritage, which became disabled while crossing Alitak Bay off the Gulf of Alaska at Kodiak Island during a severe storm before dawn. The engine compartment flooded, and the vessel capsized and sank, sending Stark and its six other occupants into the frigid water at a point about four miles from the nearer shore. Stark and four others of the crew were able to board a life raft. After becoming aware of the situation by radio, Plancich, 58, the captain of another commercial fishing vessel, the 101-foot Tuxedni, alerted his crew, and the four men immediately left safe mooring in a bay off the nearer shore. Despite darkness, sustained winds of 66 m.p.h. gusting to 75 m.p.h. that engendered 25-foot seas, a sub-zero air temperature, and blowing snow, the Tuxedni made its way about four miles over the course of an hour to the last known location of the Heritage. Waves broke over the boat en route, and freezing spray impeded visibility and caused the boat to accumulate ice. After his crew spotted a light from the life raft, Plancich, in two attempts, positioned the Tuxedni close to and upwind of the raft. The crew then threw a line to the raft and drew it next to the Tuxedni. One by one, the five men in the life raft jumped onto the side of the boat, Stark last, timing their jumps to the swells, and then were hauled aboard the Tuxedni by its crew. Learning by radio that a Coast Guard helicopter had rescued the two others from the Heritage, Plancich and his crew returned the Tuxedni through unabated conditions to safe mooring at the nearer shore. No one was injured. 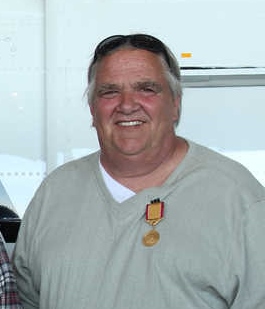