Gerald L. Barcus helped to rescue Patrick L. Burcham and William R. Howell, Jr., from burning, East Liverpool, Ohio, June 16, 1979. Burcham, 53, and Howell, 29, were in a pickup truck that overturned onto its side and caught fire from leaking gasoline. Barcus, 37, off-duty fire department lieutenant, and another man ran to Burcham, who was partially through the window opening, and pulled him out fully. Flames were spreading in the cab and on the truck bed as Barcus and the other man then removed Howell. Burcham recovered from his burns but Howell died. 57141-6499

Barcus was a 1959 East Liverpool High School graduate and spent his entire life in the city he cared about deeply. He spent some time in the Navy, but East Liverpool was his home. “His knowledge about the city and its history was remarkable,” East Liverpool firefighter Bob Smith said. Barcus knew the people, the places, and the important moments in history.

On June 16, 1979, Barcus risked his life to help rescue two men from a burning car along River Road. One man did not survive. Barcus received the Carnegie Medal for his heroic act. He accepted the award on the steps of City Hall.

Barcus was a member of the board of directors of the American Red Cross from 2001 to 2004, and he was honored in 2008 by the Masonic Lodge groups in the East Liverpool area as part of the Veterans of Past, Present, and Future event.

Firefighters from 10 departments gave Barcus a final farewell. After a Mass of Christian Burial at St. Aloysius Community Parish, the funeral procession passed Central Station and then went to Columbiana County Memorial Park for the graveside service. 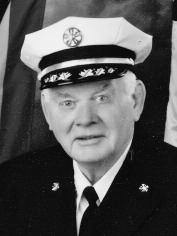