George W. Cowgur saved Samuel B. Downey from suffocation, Theodore, Texas, August 4, 1914. Downey, 40, farmer, was overcome by carbon dioxide at the bottom of a well 30 feet deep within two minutes after he entered the well. Although another man at the well had previously told him that men had been affected by damp the preceding day, Cowgur, 43, farmer, held to the well rope and descended on uneven stones at the side of the well. He made three attempts to place a chain which was attached to the end of the well rope around Downey before he succeeded in fastening it. Cowgur grasped the rope above Downey and climbed the stones while the man at the top turned a windlass and raised Downey. Cowgur was too weak to help in getting Downey to the shade of a nearby wagon. Downey was revived in about 30 minutes. 13834-1083

George William Cowgur, 1872-1951, was the son of Strawther and Malvina Taylor Cowgur. He was born in Arkansas and moved to Grayson County, Texas. He was a farmer in Grayson County most of his life. The last few years of his life, his health was poor and he moved to Whitesboro, Texas, where he died.

He was buried in Dixie Cemetery, just north of Whitesboro. 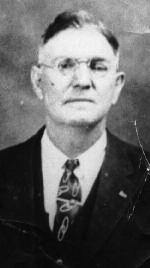