Fusako M. Petrus died rescuing a woman from assault, North Highlands, California, April 26, 2017. The woman, 61, and her friend, Petrus, 86, retired clerk, were walking apart at dawn on a school-campus track when an 18-year-old man approached the woman from behind, grasped her, and struck her in the face. They went to the ground and the assailant struck the woman again while holding her down and attempted to sexually assault her. Petrus, who was considerably smaller than the assailant, witnessed the attack and moved closer to them, brandishing a stick. Petrus struck the assailant and called for him to leave the woman alone. The assailant shifted his attention to Petrus and began to violently punch and kick her with his hands and feet even after she was on the ground and until she no longer appeared to be moving. The woman was treated for her injuries and sheriff’s deputies arrested the assailant later that day. Petrus did not survive the attack.

Born September 7, 1930 in Kyoto, Japan, Fusako Matsumoto Petrus died in North Highlands CA on April 26, 2017 at the age of 86. In the early 60’s Fusako got a job at the base exchange (BX) in Tachikawa, Japan where she met Alfred “Pete” Petrus who was stationed at the Airforce base. They married in 1962 and in 1964, when Pete was transferred to McClellan AFB they moved to North Highlands, CA. Fusako again got a job at the BX where her co-workers nicknamed her “Pete.” She received awards for being the friendliest cashier and worked at the BX for 20 years before retiring. In 1985, Fusako received her naturalization status and was proud of her US Citizenship. She was a steadfast friend who developed her extended United States family, which included other Japanese women who had married servicemen, as well as her coworkers and neighbors. One of her favorite activities began in the ’70s when she began walking with neighbors at the local high school track. The Japanese women became a tight knit group, always getting together to share Japanese food, holidays and life events. Fusako was always available to drive her friends who didn’t drive. She avoided freeways but could get all over Sacramento with a little planning. Fusako and Pete did not have children, but shared their love and kindness with many of their friends’ children as their own extended family. Fusako’s husband died in 1997. When her doctor told her to lose weight she took it to heart, because she wanted to be able to care for herself as she got older, always thinking, “I am on my own here with no children or family.” She cut back on sweets and senbei, though never giving them up. Fusako continued to walk the HS track with her friends six days a week except when it rained. Fusakos’ commitment to being independent and healthy helped her lose weight. She made many friends walking in her North Highlands neighborhood over the last 40 years and was proud that she and her current walking partners were so international, representing 3 different continents. She often commented on how diverse her walking group was and how well they got along. Her walking in the neighborhood and at the high school track is one of the familiar pieces of the fabric of her community tragically lost in her death. Fusako is survived by her niece Kaoru Imai who lives in Osaka, Japan, as well as her chosen US family of friends. Fusako lived and lost her life being a dedicated friend. She is missed but will not be forgotten. A celebration of life will be held for family, friends and the community at the North Highlands Park & Recreation Community Center located at 6040 Watt Avenue Saturday June, 3 at 11am. In lieu of flowers, memorial donations to Meals on Wheels by ACC, 7675 Park City Drive, Sacramento, CA 95831 would honor Fusako’s caring of her friends and her enjoyment of a good meal.

(Edited from obituary published in The Sacramento Bee from May 6 to May 7, 2017.) 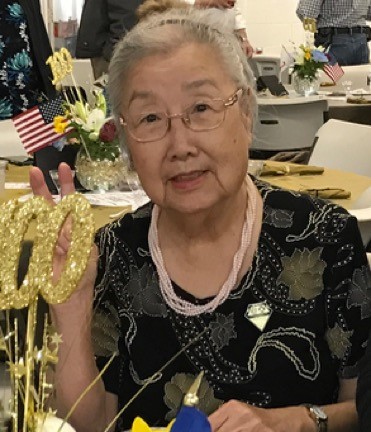