Evelyn S. Bryan, 48, flight instructor, saved John J. Ryan, 34, helicopter pilot, and attempted to save Davis L. McNiel, 49, utility manager, from burning and an impending explosion, Morristown, Tennessee, April 28, 1958. When McNiel banked the craft sharply as he and Ryan were taking off from an airport where they had stopped to refuel, their helicopter crashed, fatally injuring McNiel and causing Ryan to lose consciousness. The badly damaged craft was tilted on its side so that the rotor blades, which continued to spin, struck the earthen runway and caused the craft to bounce up and down. Dense smoke rose from the engine, and gasoline leaked from the craft’s four fuel tanks, all of which had been ruptured. Mrs. Bryan, who was the only person on duty at the airport, obtained a fire extinguisher and ran to within 20 feet of the helicopter. By then one of the blades had broken off, but the other still was striking the ground at one side of the craft. At the opposite side Mrs. Bryan laid aside the extinguisher and crawled beneath the revolving blade to the cockpit. As the helicopter settled to the runway between bounces, she extended the upper part of her body into the cockpit and turned off the engine switch. She then retrieved the extinguisher and sprayed foam from it onto the engine, diminishing the smoke. Ryan began to revive and started to moan. Mrs. Bryan ran to him and, aided by three men who by then had been attracted, attempted to lift Ryan from the helicopter but, realizing he was badly injured, decided to wait for medical aid. Ryan was hospitalized several months.

With her first husband serving in the Army Air Forces during World War II, then known as Evelyn Bryan, she was looking for something to occupy her time when she wasn’t running their dry-cleaning business in Jefferson City, Tenn. She found it in a small advertisement. The ad said, “Learn to fly.”

“It was love at first flight, and I have been flying ever since,” Johnson said in a 2005 interview with the Associated Press. She was 34 years of age when she took her first flight and continued flying until glaucoma restricted her vision and caused her to quit in 2006, the year she turned 97. Johnson held the Guinness World record for logging the most hours in the air by a female pilot. By the time she stopped flying, she had logged 57,635.4 hours, or more than six and half years in the air.

Johnson, who first soloed on Nov. 8. 1944, earned a private license in 1945 and a commercial certificate a year later. She became a flight instructor in 1947 and a pilot examiner in 1952. The following year she began managing what is now known as Morristown Regional Airport in Tennessee.

She was affectionately nicknamed “Mama Bird,” because she treated her flying students as a mother bird does her babies. Johnson trained more than 5,000 student pilots and administered more than 9,000 flight checks for the Federal Aviation Administration. She was inducted into the National Aviation Hall of Fame in 2007. She also was an inductee in the Women in Aviation International Pioneer Hall of Fame, the Flight Instructor Hall of Fame, and aviation halls of fame in Tennessee and Kentucky.

Among Johnson’s many honors was an award from the Carnegie Hero Fund Commission for saving the life of an unconscious helicopter pilot who was severely injured when he crashed during takeoff at the Morristown airport in 1958. Johnson, who was one of the first women to obtain a helicopter license, was estimated to have flown 5.5 million miles over the decades.

In 2006, Johnson lost part of her left leg and injured her right leg in an automobile accident, but she learned to walk with a prosthesis and, without a walker, returned to her job managing the airport.

She was born Evelyn Stone on Nov. 4, 1909, in Corbin, Ky., and moved with her family to Tennessee as a young child. After graduating from Tennessee Wesleyan College in Athens in 1929, she taught sixth grade for a couple of years. She met W. J. Bryan, who became her first husband, while attending the University of Tennessee. They were married in 1931 and moved to Jefferson City near Morristown, where they started a dry-cleaning business. Bryan died in 1963. Her second husband, Morgan Johnson, died in 1977. 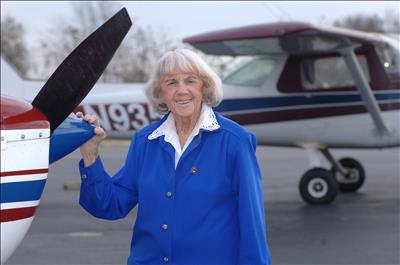