Duane E. Vanlanham helped to rescue Bridgetta N. Hadley from attacking dogs, Saginaw, Michigan, March 5, 2009. Hadley, 41, was about to enter her vehicle when three female dogs of pit bull mix charged and attacked her. They took her to the ground and bit her about the arms and legs. Hadley attempted to fight the dogs off as she screamed for help, alerting a neighbor, Vanlanham, 48, disabled laborer, who lived across the street. Taking a stick with him, Vanlanham immediately ran to Hadley, who had regained her footing, and struck one of the dogs with it. As he worked to free Hadley of the dogs, a car stopped at the scene, and Hadley entered it. Vanlanham attempted to escape to the hood of the car, but the dogs pulled him from it, took him to the ground, and mauled him, inflicting severe injury to his legs and feet. Police arrived and dispersed the dogs. Hadley and Vanlanham required hospital treatment, including surgery, for their wounds, Vanlanham developing complications that necessitated amputation of several fingers and toes.

Duane Vanlanham, 59, a 1979 graduate of Buena Vista High School, died on June 14, 2019, after a fight with cancer. He worked at T & M Party Store for many years. He loved God and was a faithful member of Mt. Moriah Baptist Church.

Vanlanham was born May 31, 1960, in Saginaw, Mich., the son of Lewis and Bobbie Vanlanham. He later had a stepfather, Walter Cureton, Sr., and he was the father of Leslie Banks and Duane Vanlanham, Jr. He enjoyed playing dominoes, watching sports, and spending time with his family and friends.

(From an obituary published on the website for the Paradise Funeral Chapel in Saginaw, Mich.) 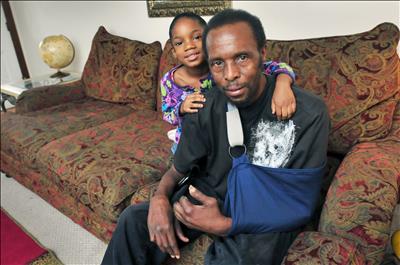