Dessie Hayter saved Jonell M. Harman from being killed by a train, Lockwood, Missouri, April 24, 1934. Jonell, 5, accompanied by Miss Hayter, 28, bookkeeper, was walking toward a railroad crossing when a passenger train was approaching at a speed of 30 m.p.h.. Jonell ran past Miss Hayter and stopped on the near rail of the track. Miss Hayter ran 15 feet to her, reaching her when the locomotive was 30 feet from her. She grasped Jonell’s clothing, turned, and threw her off the track. Before Miss Hayter could move from her position, she either fell or was struck by the locomotive and knocked down between the track and an adjacent platform and was dragged by contact with steps and journal boxes for 66 feet. The locomotive came to a stop 120 feet beyond the point of rescue. Miss Hayter’s right foot was severed, and she sustained other serious injuries, from which she recovered.

She attended Draughon’s Business College in Springfield, Mo., after graduating from Walnut Grove High School in 1925. She was employed by the Farmer’s Exchange in Lockwood, Mo., and spent most of her life in Lockwood.

She married George Leaming on Sept. 16, 1934, about six months after she was seriously injured in a train accident on the main street in Lockwood. The accident resulted in the loss of her right leg, but she saved the life of her niece, Jonell Harman, and was awarded the Carnegie Medal and $500. She and her husband purchased a business in Lockwood and created Leaming Motor Service in 1940, which they owned and operated until selling it in 1974.

Leaming was a charter member of a bridge club, The Marthas. She also was a member of the Lockwood Business and Professional Women Chapter, which selected her as the woman of the year in 1964. Leaming was ordained an elder in the Lockwood Presbyterian Church and held a position on the Older Adults Transportation System Board. 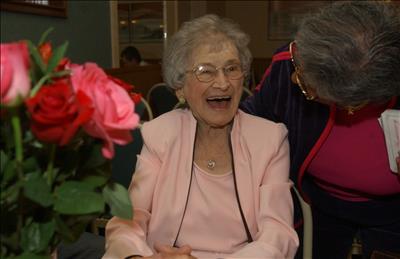