Clodis McCuien attempted to save Neeley P. Harrison from being killed by a train, Humphrey, Arkansas, August 27, 1962. Mrs. Harrison, 86, walked toward two tracks nine feet apart at a railroad crossing as a freight train approached on the far track at a speed of 57 m.p.h. Warning lights and bells at the crossing were functioning. McCuien, 24, construction laborer, was 35 feet from the crossing. As the engine approached to within 350 feet of the crossing, McCuien ran toward Mrs. Harrison, who moved onto the track into the path of the train. The engineer applied the emergency brakes. McCuien reached the track and lunged toward Mrs. Harrison with both feet off the ground and both arms extended. His shoulder struck the shoulder of Mrs. Harrison, who outweighed him by nearly 50 pounds. The impact turned Mrs. Harrison around but did not knock her from the train’s path as McCuien intended. She fell across the rail, while McCuien’s lunge carried him beyond it. The locomotive struck and killed Mrs. Harrison, and a projecting step on the side of the engine brushed McCuien’s heel as he landed beyond the track. The engine stopped 3,000 feet past the crossing. McCuien sustained lacerations, which healed in three weeks.

Born on June 7, 1938, he was a son of Joe and Mary Miller Robinson McCuien. He was a master plumber and a member of the Kingdom Hall of Jehovah’s Witnesses.

McCuien was a graduate of Pine Street High School in Conway, Ark., and of Arkansas Agricultural, Mechanical & Normal College, which later became known as the University of Arkansas at Pine Bluff. He was a member of North Cedar Hunting Club.

A memorial service was held on Dec. 30, 2000, in the Townsend Elementary School auditorium in Pine Bluff. 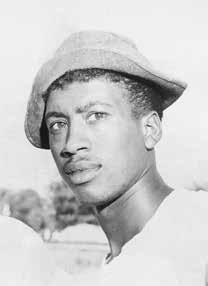