Christopher Canale saved Grace Robertson and John F. Weber, Jr., from burning, Manorville, New York, October 8, 2015. Robertson, 70, was the passenger of a small school bus that, driven by Weber, 67, caught fire at its front end in an accident on an interstate highway. Off duty and out of his department’s jurisdiction, Canale, 33, police officer, drove upon the scene and responded to the bus. Despite flames 12 feet high issuing from its engine area and heavy smoke inside the bus, Canale pried open the bus’s passenger door and entered the vehicle. At a point about halfway toward the back, he found Robertson on her hands and knees in the aisle. Canale pulled her to her feet and backed from the bus, pulling her. He lifted her from the vehicle and guided her to safety on the highway shoulder. Canale then returned to the bus and forced the driver’s door open. He reached for Weber and, locking arms with him, worked about a foot from the spreading flames to free Weber, who was pinned by the steering column. Pulling on him repeatedly, Canale freed Weber as flames were reaching the interior of the bus. The men stepped away from the vehicle moments before flames engulfed it. Robertson and Weber required hospital treatment for their injuries, but they were not burned. Canale was treated for smoke inhalation at the scene and coughed for about a week, but he fully recovered. 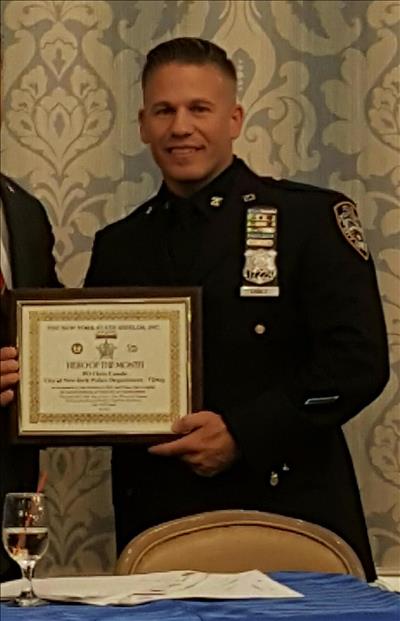