Chester O. Cox, 18, student, died saving Edith M. Goeppinger, 14, from drowning, Belton, Texas, April 16, 1922. Edith attempted to return to a gravel bar in the Leon River, from which she had swum, but was unable to make progress against a strong eddy current. Cox, who had warned Edith that the conditions were dangerous, entered the water, dressed, and swam to Edith, who was 45 feet from the bank. He took hold of her around the neck, and after making an attempt to swim toward the bar, he swam with the current about 45 feet, gradually pushing Edith toward the bank and enabling her to catch hold of tree roots at the bank. She reached the bank safely, but Cox was carried some distance under water and was drowned. 22344-1852

In loving memory of Chester Cox, who drowned in the Leon River on April 16, 1922, and to whom this simple tribute is dedicated. It is published not to glorify his name in death — that would offend the immortal spirit of this departed youth — but to offer a word of condolence to the bereaved parents and other relatives and assuage their grief in the loss of this splendid young gentleman.

Cox went to his death in keeping with his true character. Rescuing a little girl from the whirlpool and placing her safely on the banks of the stream, only to fall back into the torrent himself — his soul to be washed away into eternity — he was carried under with a smile on his face. And his was the smile of victory, for he had accomplished that which he held dearer than his own life; he had saved the life of another, had battled death that had come so dangerously near to one he loved and had won, only to fall himself through an unexplained smite of fate.

But Cox would not have the memory of his beautiful yet tragic sacrifice linger in the mind of the little girl he rescued. Had fate been kind to him, the incident of the actual rescue would have become a pleasant memory — just a “little thing” that transpired on a pleasure outing to cause him not to forget his pleasant youthful associates as the shadow of life length ended for him. But if he had known when he plunged into the whirlpool that his life must be taken to save that of the other, he would not have hesitated on the banks of the swirling stream.

He was a young man with ambition. He never asked others to shoulder the heavy end of the burden in the performance of a mutual task. If one had to bear the heavier load than others, he was ever willing to take it upon his own shoulders, never shirking his duties at home or play — always respectful of and devoted to his elders and always a gentleman on the streets or athletic field.

Cox was the son of Mr. and Mrs. Perry Cox of Belton, Texas. In his death, the community has lost heavily, for the world is in need of more men of the stuff of which he was made — real men who are not afraid to die when duty calls; true, courageous men undaunted in the face of danger; unselfish men who cheerfully will make a sacrifice to save others, who will smilingly give their lives as Cox did, if necessary, so that others might live. His passing has left a vacancy in the hearts of friends and loved ones, but surely the angels in heaven are rejoicing to receive into their eternal kingdom a soul so valiant and true.

(Tribute provided by a family member.) 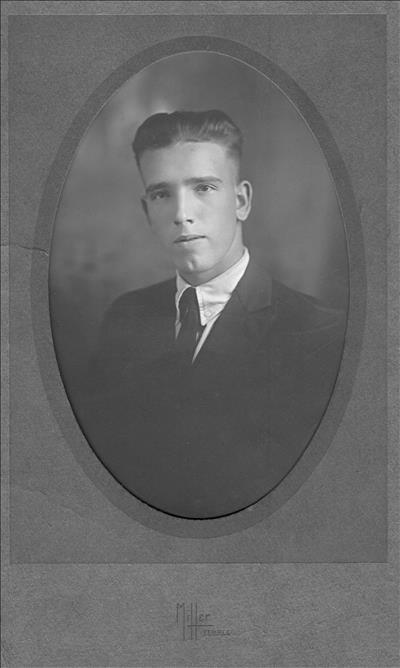