Chad Ammerman helped save John L. McKenna from drowning, West Creek, New Jersey, June 21, 2021. Unable to re-enter a righted sailboat after it capsized, McKenna, 82, swam and floated to a point in Little Egg Harbor within distant sight of bystanders atop a bulkhead along a bank. Fatigued, McKenna called for help. Ultimately alerted, Ammerman, 41, corrections officer, was near the bulkhead’s parking lot and called 911 upon seeing McKenna. Concluding that a rescue boat might arrive too late, Ammerman collected an emptied, 29-pound plastic cooler, jumped into the bay with it, and swam through choppy waves toward McKenna, following hand signals from those on the bulkhead to direct him. Responding to McKenna, Ammerman instructed him to grasp the handle on one end of the cooler. Ammerman then backstroked with one arm, occasionally alternating, as he held the handle on the other end, towing McKenna toward the bulkhead. A boat, piloted by a firefighter, responded, and they entered the boat and exited at the bulkhead. First-responders tended to McKenna, who recovered without medical treatment. Ammerman was not injured. 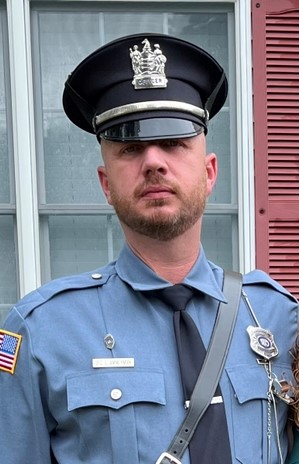