Brian D. Lozier rescued John A. Crandon from an attacking bull, Cato, New York, August 19, 2012. When Crandon, 43, entered a pasture to tend one of his cows, his 1,100-pound Jersey bull charged and attacked him, taking him to the ground and ramming him in the chest repeatedly with its head. Unable to escape, he screamed for help. Lozier, 23, carpenter, was about 1,200 feet away and heard Crandon’s screams. He started on foot toward the scene and about halfway there saw the attack. Calling 911, he ran to a wire fence along the edge of the pasture, picked up a few rocks and threw them at the bull, but to no effect. Lozier then grasped a four-foot length of two-by-four board from nearby, stepped over strands of the fence, and approached Crandon and the bull, then about 10 feet away. He threw the board at the bull, striking it on the back. The bull left Crandon and went to the barn, and Crandon crawled from the pasture, Lozier joining him to drag him farther away. Crandon required hospitalization for treatment of significant injuries. 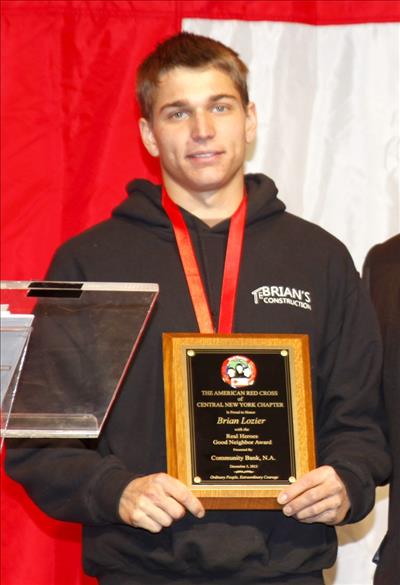