August H. G. Hanson, 18, student, saved Hazel M. Shaw, 15, and Bertie L. Borden, 17, from drowning, Owatonna, Minnesota, November 30, 1907. The two girls broke through the ice on the Straight River, at different places, 40 feet from the bank. Hanson got one out by getting on his knees close to the hole and lifting her. While lying on a plank and reaching for the other, he fell headlong into the water, but, regaining the plank, he caught the girl and supported her about 5 minutes, until they were pulled out with a rope. 2086-186

August H.G. Hanson, 71, a landscape architect who helped to design the grounds of the Thomas Jefferson Memorial and the Carter Barron Amphitheater, died of cancer on Jan. 4, 1961, at the Northern Virginia Doctors Hospital.

Hanson, of Falls Church, Va., came to Washington, D.C., in 1929 to work for the Office of Public Buildings and Public Parks, now the National Capital Parks. Among his other jobs, Hanson played a role in the landscaping of Lafayette Park, Mount Vernon Memorial Highway, and Memorial Avenue leading to Arlington Cemetery.

Hanson was born in Owatonna, Minn. When he was 17, he saved two women from drowning when they fell through the ice while skating. The cash award for his heroism from the Carnegie Hero Fund Commission enabled Hanson to study at Carlton College, Northfield, Minn.

He interrupted his college studies during World War I to serve in the Navy Band, playing the drums. He later returned to the University of Illinois to study landscape architecture, receiving his degree in 1924. Between 1924 and 1929, Hanson was director of parks in Sioux Falls, S.D. He retired from the National Capital Parks in 1959.

An expert on the culture of roses, he was a consulting rosarian for the Potomac Rose Society, and the first president of the Falls Church Garden Club. He was a past president of the Greenway Downs Citizens Association, a member of the Minnehaha Lodge F.A.A.M. of Minneapolis, and a member of the American Society of Landscape Architects. He also served on the official board of the Dulin Methodist Church in Falls Church.

He was buried in Columbia Gardens Cemetery in Arlington, Va. 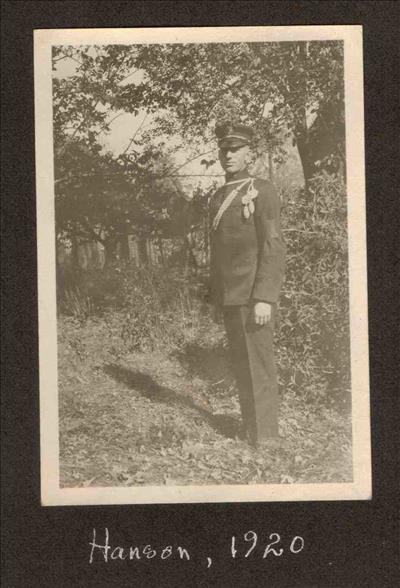