On the evening of June 12, 2018, more than a decade after the centennial celebration of the founding of the Carnegie Hero Fund Commission by Andrew Carnegie, 275 invited guests returned to Carnegie Music Hall to honor his philanthropic legacy and 10,000 Carnegie heroes. 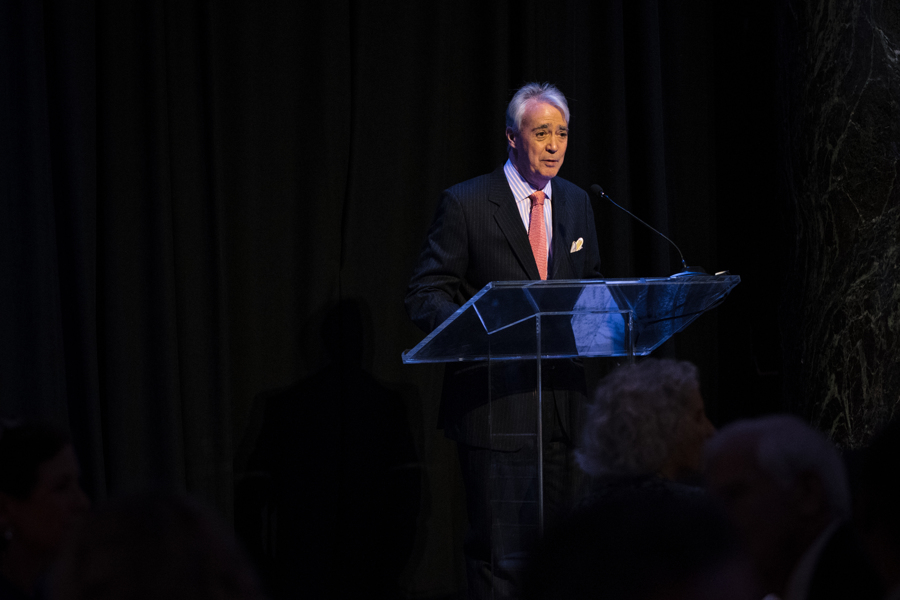 Master of Ceremonies Scott Simon, a decorated journalist, author, and host of Weekend Edition Saturday on NPR, welcomed guests to the festivities. The Chicago native proved he had indeed done his homework with his expert pronunciation of the Carnegie name. Following Simon’s introduction, William E. Hunt, chair of the museums’s Board of Trustees, and Mark Laskow, chair of the Carnegie Hero Fund Commission, provided additional introductions.

“More than a century ago, Andrew Carnegie built a series of organizations in North America and Europe through which he intended to do nothing less than make the world a better place. That’s an ambitious goal, but he was an ambitious man. His building materials were money and ideas, and he built well,” he said.

After dinner, guests moved into the intimate auditorium of Carnegie Music Hall to hear words on the educational impact and legacy of Andrew Carnegie from Farnam Jahanian, president and Henry L. Hillman President’s Chair of Carnegie Mellon University, and Mary Frances Cooper, president and director of Carnegie Library of Pittsburgh.

Carnegie Hero Fund President Eric P. Zahren spoke of the strength of character and altruistic bravery ingrained in Carnegie’s heroes. He referenced the selfless actions of William Hunter, a Scottish boy who lost his life attempting to save another child from drowning in a lake in 1886, believing it gave “life to a movement — the very same we celebrate tonight — in support of an idea that one individual, acting selflessly in behalf of another, can in itself not only save a life, but give life to hope for our future and the world.”

At the end of his address, Zahren revealed a Roll of Honor of Carnegie Medal-awarded heroes and heroines, completed with meticulous attention and in accordance with the Deed of Trust, which calls for a “finely executed roll.” This timely tribute to the more than 10,000 past and present Carnegie Heroes, not only indicated the unwavering sense of bravery and self-sacrifice found in humans, but also the Carnegie Hero Fund’s commitment to sharing the stories of individuals such as Vickie Tillman and Jimmy Rhodes, who were the guests of honor at the gala as the commission’s 10,000th and 10,001st Carnegie Medal awardees, respectively. 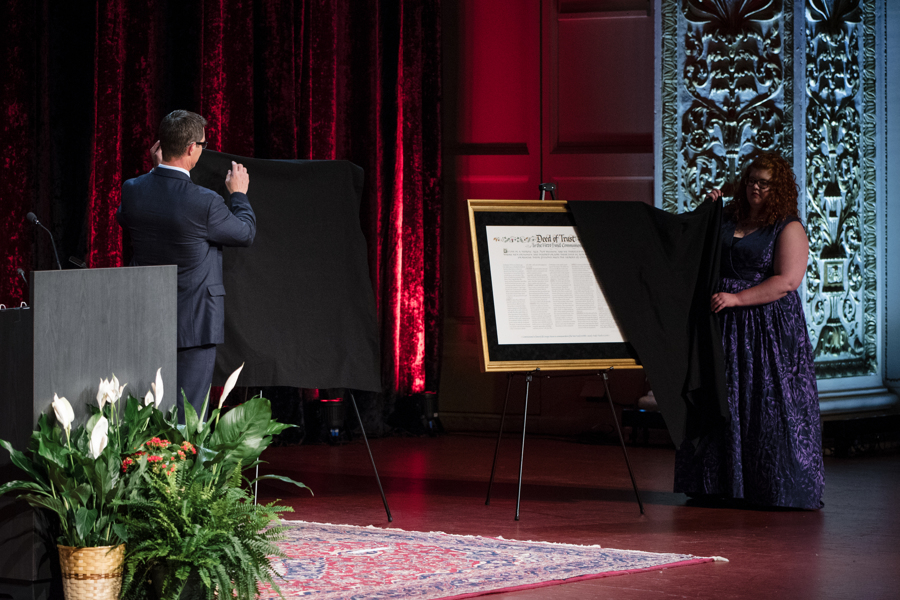 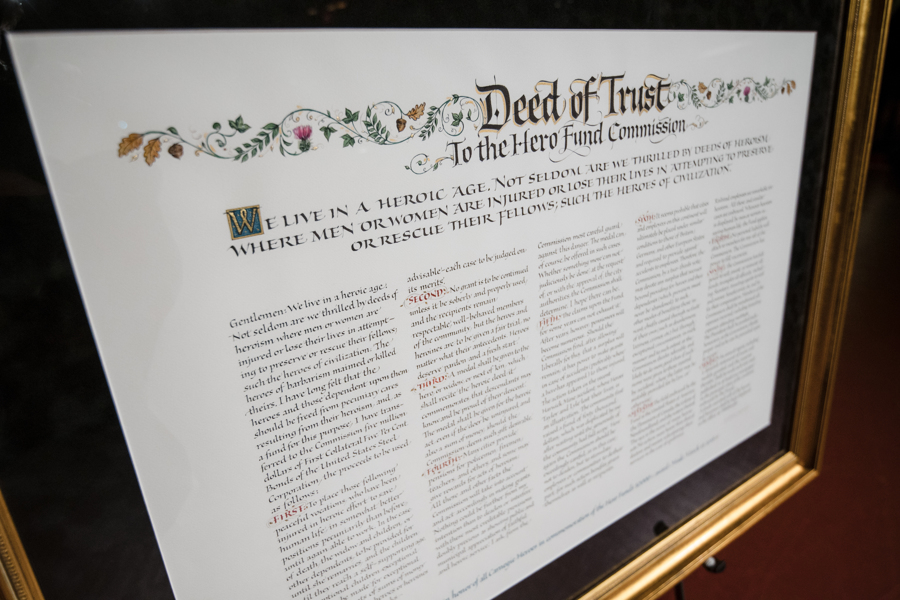 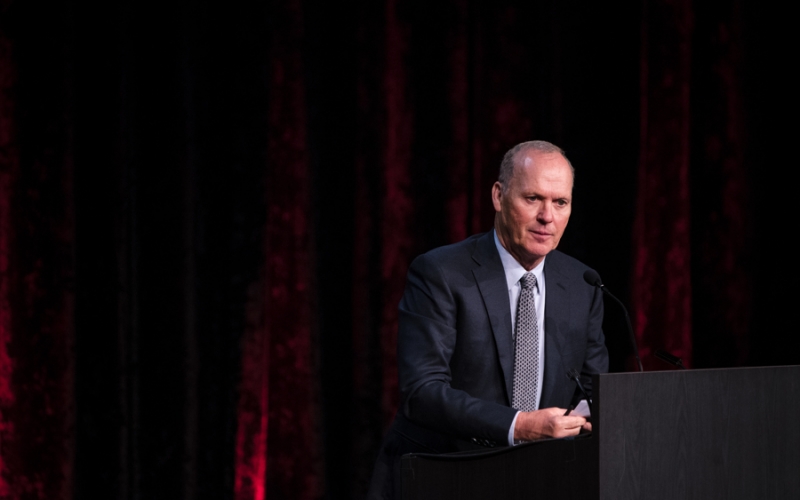 Keynote speaker Michael Keaton engages the audience while reflecting on the importance of recognizing heroic acts. "The idea of honoring those who have been heroic at the risk of their own well-being, to me, stands out," he said at the Pittsburgh event.

Following Zahren’s words, keynote speaker and Pittsburgh native Michael Keaton returned home to recognize the 10,000th and 10,001st Carnegie Medal awardees. During his long and impactful acting career, he has embodied heroes such as Batman, but spoke of the importance of the Fund’s deferent treatment of the title ‘hero’ and the recognition of true noble acts of valor, evident in Carnegie Heroes.

He noted that the common denominator of heroism is courage.

“Courage shows up all the time in this world and often without any fanfare,” he said.

Last winter, Tillman, a 56-year-old school cafeteria clerk stopped her car after seeing a wounded police officer struggling to take a man into custody.  The 5’2” woman rushed to the men, removed the suspect’s hand from the officer’s holstered gun and held it behind his back.  As the man continued to punch the officer, Tillman impeded his attack, until other police officers arrived.  It took two other police officers to subdue the assailant and take him into custody.

As Simon read the details of Tillman’s acts aloud, Aime, who towered over the 5’2” Tillman, placed the Carnegie Medal over her head.

“Ms. Vickie saved my life. Anything for her, I’m willing to do,” Aime said.

Carnegie Hero #10,001 Jimmy Rhodes, 38, rescued Patrick E. Mahany, Jr., 64, from a burning medical helicopter on July 3, 2015, in Frisco, Colo. After hearing of the helicopter crash in the hospital’s parking lot, Rhodes, a radiographic technologist employed by the hospital, ran to the helicopter’s nose with a fire extinguisher, spraying Mahany and attempting to reach for his legs to free him from the burning wreckage. Two nurses aboard the helicopter escaped. Although Rhodes successfully pulled Mahany from the burning wreckage, Mahany did not survive the severe burns, blunt force, and internal thermal injuries he suffered. Rhodes received medical treatment for smoke inhalation and burns and recovered.

At the event, Mahany’s widow, Karen Mahany, in an emotional moment, presented the Carnegie Medal to Rhodes, both of their eyes wet with tears. The audience members, many of whom were also moved to tears, stood and applauded Tillman and Rhodes for several, heartfelt minutes.

Andrew Carnegie’s dedication to honoring civilian heroes continues to be fulfilled by the Carnegie Hero Fund. More than 114 years later, during a celebratory evening at the Carnegie Music Hall, the presentation of the 10,000th and 10,001st Carnegie Medals are testament to the steadfast, inherent capability of humans to act selflessly and bravely at times when they are needed most.

Cpl. Billy Aime, the man Tillman rescued, presented the Carnegie Medal to her at the event, as Simon read the harrowing details of her act.