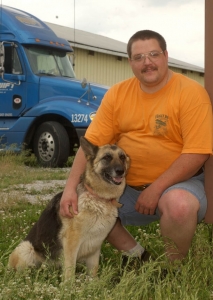 It would have been understandable if Anthony “Tony” Gouverneur had grown up with an exaggerated sense of caution. After all, when you’re born without abdominal muscles, the common falls and scrapes and blows of childhood can result in more than just a temporary black-and-blue mark.

Tony was born with Eagle-Barrett syndrome, also known as “prune belly,” while his twin brother Robin was not. No one has yet determined the definitive cause of the condition, which affects about one child out of every 40,000 born in the United States. Without the normal protection of healthy abdominal muscles, internal organs are susceptible to severe injury from a sharp blow—the kind every child experiences from time to time on the playground or in the back yard. For that reason, Tony’s parents cautioned but also encouraged him: Football and other contact sports were out, baseball was okay.

Prune belly often includes kidney malfunction, and in Tony’s case, one of his kidneys ceased working altogether by the time he was 21 and the other was functioning at only 20 percent. Kidney transplant surgery offered the only hope of restoring normal function. And who could prove to be a better donor than an identical twin? Robin donated a kidney, one unselfish act among many that Tony experienced in his family.

When he was 10 years of age, the furnace in a residence across the street exploded. Tony remembers his family serving refreshments to rescue workers. Likewise, he remembers his grandfather, who owned a garden tiller, tilling ground for families who would have had some difficulty doing it on their own. There were other, everyday acts of kindness that his parents and grandparents showed others without drum roll or toot of horn.

Little wonder that Tony would come to consider service to others as a normal part of life. He became a volunteer firefighter and on one occasion responded to a report of a burning motor vehicle. It would turn out that a person inside the vehicle died.

By early 2002, Tony, then 27, had obtained a commercial truck driver’s license and was touring the United States for two to three weeks at a time. It was during one such cross-country haul that he drove upon the scene of an automobile collision, in the desert of southern San Bernardino County, Calif. It was almost 7 o’clock on a March evening, and the flames soaring into the dark sky from the two vehicles would have been visible for miles – and a terrifying sight at the scene itself.

Other motorists stopped at the scene. But no one braved the flames to rescue the occupants of either vehicle. That is, until Tony arrived.

It would have been easy for him to stay in his rig, to justify a lack of action by the need to safeguard his health. Curiously enough, Tony had spoken by telephone a few hours earlier to his grandmother, who told him that his grandfather, in ailing health, had been hospitalized. Since the call Tony had thought off and on about his grandfather, recalling his quiet unselfishness toward others.

Tony left the cab of his truck and approached one of the burning vehicles. A quick look inside confirmed his fear that the driver was dead. He looked toward the second vehicle and noticed a moving profile, a shadow against the flames, in the front passenger seat. He approached and saw a 34-year-old woman, wife of the driver and mother of three children, her safety belt still fastened, behind a locked passenger door. It was obvious to Tony that she was dazed.

Not without difficulty Tony broke the window, then he unlocked the door and leaned inside the burning vehicle. He pulled the woman to safety moments before flames prevented any attempt to rescue her husband. The woman was hospitalized and treated for serious burns. Tony had a minor burn on his arm and was treated at the scene.

Tony, of Evansville, Ind., received national recognition, including the CARNEGIE MEDAL, for risking his life for a stranger, but he seems the least impressed by his own act. Not surprising for someone whose personal creed is not to permit fear of personal injury prevent him from enjoying life while at the same time recognizing that sacrifice for others is a normal part of life.